My dad came home from Vietnam in September 1970. At least that’s when I first saw him, because it turns out he had actually come back to the United States in July to have an operation on his shoulder after he’d been shot. He showed up at the front door in September just as I was starting sixth grade. By December, we were packing everything up and moving from Kansas City, where I lived in a ghetto for the year he was gone, to Loring AFB in Limestone Maine, which was putting me in a drastically different environment that anything I had experienced before and anything I would experience after.
END_OF_DOCUMENT_TOKEN_TO_BE_REPLACED 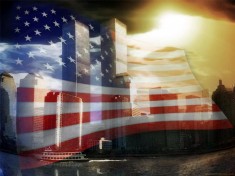 I wasn’t sure I was going to have a post on this tragic event this year, but decided I wanted to add something special that I found back in June that I had on my other blog. See, that day was horrid, and we’ve seen so many things that happened on that day, and the planes hitting the towers (Flight 11 and Flight 175) in NYC and hearing about the plane that hit the Pentagon (Flight 77) and the one that crashed in Pennsylvania (Flight 93) was horrible. Seeing people jumping out of buildings to their death and seeing other people running once the towers started coming down and feeling inadequate and mad and empty and angry and hateful and scared…

Yes, even now some of those things still come up. Not as much anymore because there’s something in that spot now, something replacing what was there and something that’s honoring that day and those people who died and the heroes that sprouted up and did what they had to do, felt compelled to do, even if for some of them it wasn’t their job to do.

And then there’s the people in the video below, some unsung heroes that I just heard about this year. This was truly amazing, and if you have an ounce of decency you’ll watch the video, which was narrated by Tom Hanks, and you’ll feel something good deep inside. That is, if you have an ounce of decency; yeah, I’m calling people out. This video is that good, that special, and it deserves to be shared and seen by as many people as possible. The only reason I’m not putting it out separately on Facebook and Twitter is that I did so back in June. Now it’s your turn.

Never forget tragedy, but grow from it and try to make things better, be better, and never let terror win. With that, please watch this video:

A relatively short post today. Last Sunday I asked your thoughts about 9/11/01. All week long I thought briefly about it, but wasn’t getting too deep into it because, well, it seemed that life was going on, and people were saying they were ready to move on.

I changed my mind. I’m not really going to dwell on it all day long. However, it’s important to show a few images from that day, some very disturbing things, and then close with something sort of positive, though not exactly what I wanted to show. And this article is posting at the time the first plane hit.

This first clip is of the first tower of the World Trade Center being hit. There’s graphic language, but I believe it can be forgiven this one time:

This next clip is of the second tower of the World Trade Center being hit, with commentary about the first one going on before you see it. Strange thing that there’s not a single clip of anyone on the other side of the WTC getting a real shot of it being hit, but seeing this plane, which I saw live at the time, is still chilling after all these years.

Unfortunately, I couldn’t find any real clip of the Pentagon after it was hit, and the same obviously goes for the plane that went down in Pennsylvania. The folks who helped take that plane down and giving their lives for many others took a lot of courage, and in my mind they were heroes as well as anyone else.

This next clip was the first large assembly of people in the country after this event took place, and I watched it live because I wondered what they would do. The WWE has always been upfront in its support of the troops of this country, and they didn’t let me down here.

This final clip isn’t the one I wanted to show, but NBC has a lock on the copyright and, to date, has never allowed the clip to be seen by anyone after the first few copies got out. Saturday Night Live did a show 4 days later, which was the opening show of the new season. They asked Paul Simon to come in and sing The Boxer, and had Mayor Rudy Guiliani and a host of police and firemen standing behind him as he performed the song by himself with just his guitar. I thought it was drastically inspiring, and why NBC has kept a lid on it I’ll never know. No matter; here’s a different clip of Paul Simon singing the same song, in an odd way more of what New York City used to be than it is now, or actually was on 9/11/01.

Around this time last year, I started seeing some odd email alerts coming through saying Michael Jackson had been taken to a hospital, then was in a coma. Then suddenly that message came through that took my breath; Michael Jackson was no longer with us.

After that, we went through the strangest of spectacles, which makes a lot of sense because you just couldn’t take a personality that big, one that had been in our lives for so long, and expect it to go away quietly. We learned a lot of things, some very good, a couple shocking in a way but making sense once we thought about it. But what we really learned was just how much of an impact he was in this world.

And how big an impact was that? In the week after he was gone 8 of his albums were on the top charts, and two of them were in the top 5; one was the third best selling album for 2009, and four of them made the top 20 for the year. He was the biggest selling album artist of the year in the United States with more than 8 million albums sold; who knows how that translated around the world. His estate made over $1 billion in the last year; no one else comes close, including Elvis & the Beatles.

Oddly enough, for me it’s still hard to believe he’s not here because of the legacy of music he left behind. When I’m walking at the health club, I listen to a lot of upbeat music, and many of the songs are Michael Jackson songs. As I listen to each song, I remember where I was the first time I heard the song; how classic is that? Of course, all the songs from the Thriller album were heard around the same time, as I had the album before the video for Billie Jean came out; that’s just how it was back then.

Anyway, I decided I wanted to pop a video on here to commemorate the day, and of course I wanted something I hadn’t already posted before. This song and video is my wife’s favorite Michael Jackson non-live performance, so I felt it was appropriate. And the message is apropos as well, because I do, indeed, Remember The Time: