My dad came home from Vietnam in September 1970. At least that’s when I first saw him, because it turns out he had actually come back to the United States in July to have an operation on his shoulder after he’d been shot. He showed up at the front door in September just as I was starting sixth grade. By December, we were packing everything up and moving from Kansas City, where I lived in a ghetto for the year he was gone, to Loring AFB in Limestone Maine, which was putting me in a drastically different environment that anything I had experienced before and anything I would experience after.

Basically, I had gone from a school that was all black except for one Mexican kid to a school on a military base, in northern Maine, that was the smallest school I’d ever go to, with a mixed population that I had no idea how to deal with after what I’ve gone through in Kansas City.

The kids in Kansas City hated me because I had a better education than they ever would, and I also had a full school year where I had no classes because the school couldn’t take time trying to teach me when they had all those other kids to deal with. I went from that to suddenly being back among a population I should’ve been used to, but I wasn’t really ready for them. I also wasn’t used to being in classes and having to try to remember how to study and learn again.

I don’t know whether Dad planned it or whether it was something that just came to me because that’s how the family dynamic worked, but Dad started talking about a boxer named Muhammad Ali. He first mentioned Ali while we were still in Kansas City and he started talking about him more often because of an upcoming fight between him Joe Frazier, who I had absolutely no idea who he was at the time.

Dad talked about him in very positive ways, and in retrospect that was probably an amazing thing. Ali had basically just come off of 3 1/2 years outside of boxing because he’d refused to join the military and go to Vietnam, whereas my dad had joined the Army at age 17 and had been in both Vietnam and Korea. I started to see Ali on TV and understood why Dad liked him so much. 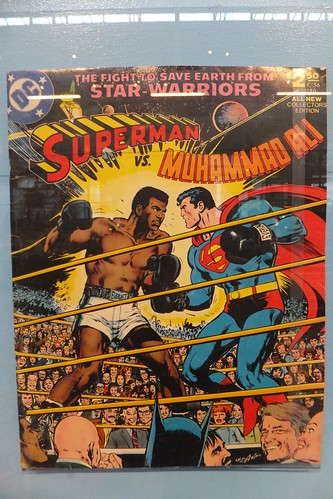 It didn’t matter that the first fight I actually got to hear of his (back then big fights were on closed-circuit TV, so you had to listen to the radio to find out what happened at the end of every round while the fight was happening) he happened to lose to Frazier. Actually, most of us thought he had won that fight because that was the narrative. Even after watching it years later there are a lot of us who thought Ali had actually won that fight, even though he did get knocked down in the 15th round. What mattered to us is that he had taken a stand for a lot of things we thought were right, and he had so much charisma that it was hard to find things that we disagreed with him on enough for us to not like him.

One other thing that was very appealing was that he was not afraid of his blackness, which was a big deal to someone like me who was just getting ready to hit puberty, and wasn’t sure how to deal with military kids who hadn’t been what I’ve been through in Kansas City. The strange thing is that even though the kids in KC hated me, I saw a lot of things that made a strong impact on my life. Along with discussions with my dad, these things got me to embrace the fact that I was a black kid in America and that I would have to try to be better than everyone else, and have confidence in myself just to have a chance to compete for whatever I decided I wanted to do. That lesson turned out to be true.

I did the same when I finally went to college and had an even smaller ratio of black to white when I first got there. Until my senior year of college, the only poster I ever had with a person in it on my wall was Muhammad Ali fighting Joe Frazier, and I tilted the poster so that Ali looked even bigger than he already was while fighting Frazier. 🙂

I started becoming more comfortable in my own skin at the beginning of my junior year of college, which was close to the time that Ali was close to leaving the profession of boxing. Normally when an athlete leaves their sport and you don’t see or hear of them as much, you start to move on to other people. Yet, Muhammad Ali was a different sort. He never went away, and even though he suffered from Parkinson’s disease he was still somehow in my life and the lives of others over the course of the next 36 years until he passed away last Friday night at age 74.

Just to get this out of the way, I mentioned my top five people that I never got to meet. Those five people are Roberto Clemente, Michael Jackson, Wilt Chamberlain, Frederick Douglass and Muhammad Ali. As often as I’ve written about Martin Luther King, Jr, he actually comes in at #6. 🙂

I’m not sure if I’ve properly explained why Muhammad Ali meant so much to me, and if you have questions you can ask me and I’ll try to explain it further.I figure that now it’s time for me to talk about Ali and some social media lessons that all of us can learn from his life. 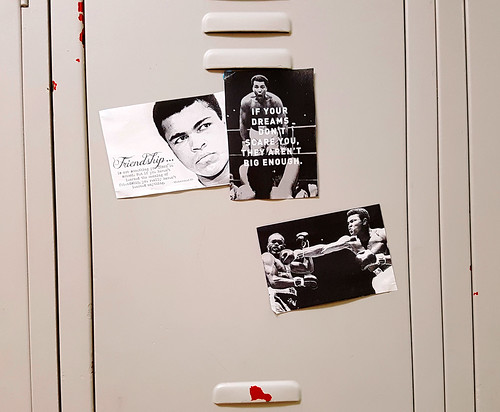 Exile on Ontario St via Compfight

1. Don’t be afraid to put yourself out there.

There were two Muhammad Ali’s.

The first was the showman, the huckster, the guy who built up the product so much that it drew in lots of people. Many of those people wanted to see him get his comeuppance, but he didn’t care about that. He was the first million dollar fighter because he knew how to capture people’s attention.

If I own up to failing at anything as it regards social media, it’s that I’m not willing to push the envelope as far as needed to get publicity. I’ve always hoped that my writing would eventually carry me to great heights in the world of blogging. After all these years I’m realizing that I’m nowhere close to where I want to be. The overwhelming majority of people who read articles from people who know something about blogging don’t know who I am.

Most people say the money is in the list. Truthfully, the money is in influence more than the list. That’s what Ali had while he was boxing, and it carried over into his retirement. If you knew how many times he used his popularity in the world to save or help someone, as well as to raise money for charity, you couldn’t come close to being impressed enough.

2. Be your authentic self

The second Muhammad Ali was the guy totally comfortable in his skin and in his convictions. Hate him or not, when he latched onto an idea he was willing to take his chances with whatever came up, no matter whether it impacted his life positively or negatively.

In that regard, becoming the first major athlete to declare his transference to Islam was a big deal in his day. He went from beloved to hated within 24 hours, but he didn’t care. Years later when he decided he wasn’t participating in the war and not taking the oath to be drafted, he was not only hated even more than before, but he lost his career and livelihood and almost went to jail for it.

Over the course of his years he said some controversial things; some he was correct on and others he wasn’t, but in the moment he truly believed in each and every thing he said and was willing to deal with the consequences. Isn’t that what I was talking about last week when I referred to freedom of speech?

3. If you’re authentic, people will embrace you if you change your mind.

I mentioned Ali saying some controversial things. Let’s get some of that out of the way:

During my formative years, it seemed that everything Ali said about race was absolutely correct. He said some negative things about Jewish people that didn’t mean anything to me because I didn’t even know what a Jewish person was until I was in college. He had some thoughts about women that I never heard at the time either, but those beliefs all turned out to be wrong as well.

The first thing is that he was authentic in his beliefs. He really thought these things and believed them with all his heart. However, once his boxing career was on the wane, the Nation of Islam stopped having such a hold on him, and he started reading the Koran for himself and his most extreme views went away, just like they did for Malcolm X. The Ali I really started to admire was the one who talked about love, respect for all religions, people getting along together, and taking active steps to show how his beliefs changed instead of just talking about them.

There have been a few writers this weekend who tried to talk about the “bad Ali”, the one who said all those things. Those few voices have been drowned out by the very people he used to condemn as being evil because they saw the metamorphosis in the man and all the good he did.

This is a great lesson for all of us to remember. If we’re authentic we might have people who dislike us every once in a while, but at least we’re being honest. We’re also not trying to hurt anyone because Ali never meant to hurt anyone; he was trying to uplift a people he truly felt was subjugating itself, which is something I do here and there on my business blog. When he learned different lessons, he didn’t just soften his words and beliefs but tossed them out for a better life and a better world, and he brought others along with him.

This is my tribute to Muhammad Ali, a man I wish I could have thanked for helping me get through a tough part of my life. I’m glad he’s finally at physical peace as he already was mentally. There will never be another like him.