Because many people don’t believe I can write a short post… this one is short… for me. Let’s see what happens…

If you don’t know who Yosemite Sam is, you’ve been living under a rock or on a volcanic island. Yosemite Sam was the 20th century’s greatest marketer. 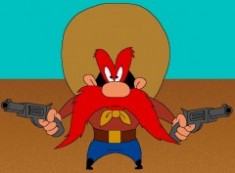 I say that because he always knew how to get a new job (when he wasn’t trying to take your money forcefully), always knew how to promote himself, was loyal to whatever organization he happened to be shilling for at the time (even if it was just him), had ultimate self confidence, and by being loud and obnoxious he was able to promote others by extension, even when that might not have been his ultimate goal.

Truth be told, if all of us ran around extolling our virtues like Yosemite Sam we might be carted off in a white jacket with belts and never be seen again. But in such extremism we can find things that we should be applying to our own marketing processes which might help both our online and offline efforts in getting business. Let’s take a look at some of those things.

1. Every time you meet Yosemite Sam he tells you who he is and what he does.

Many of us run into someone we think we know or have met but either have forgotten their name or what they do. It might seem strange telling people what it is you do up front every time you run into them, but telling people your name gets both parties out of the embarrassment of short term name recognition failure.

I’m suffering this one more that usual, forgetting people’s names even if I’ve known them for a while, as I’ve gotten into my 60’s (ouch!). Being able to tell someone where the two of you might have met, if possible, can replace telling people what it is you do and get a positive conversation started. Still, it never hurts to remind people who you are.

2. Yosemite Sam gives off supreme confidence in who he is and what he can do.

Most of us were taught not to brag about ourselves, to be modest, and I tend to think that takes away some of our swagger when we interact with people, especially in business situations. We don’t always give off the vibe of confidence; we’re more likely to give off the vibe of desperation because we’re trying to get someone’s business.

Yosemite Sam doesn’t care; he’s fearless. In his way it’s intimidation; in our way it’s abrasive. It’s smart to learn how he does things, then figure out ways to do it your way. Business isn’t kind to cowardice, perceived or not.

3. Yosemite Sam is relentless; he never gives up trying to get the job done.

Whether he’s trying to rob you or put you in jail, he lets setbacks bounce off him and comes back for more. Many of us give our marketing or sales a try, and when we don’t get the type of response we want we bail, say that kind of thing will never work, and often don’t try it again. There’s only so many ways of marketing that if when we adopt these principles we reach the end quickly, and they are sitting around wondering what the heck we should try next.

I’ve been here for a long time; it’s easier to get discouraged than to plow through. I’m changing that this year; I’ll still be mister nice guy, but I’ve got goals to pursue and money to make… here I come y’all!

4. Yosemite Sam is nothing but pure energy.

If he weren’t a cartoon character, you’d admire him for his energy. He might be energetic to the extreme, as he never goes on vacation and is relentless, but he’s obviously someone who realizes that without hard work no one succeeds, and he’s had some great jobs over the course of his life.

There are a lot more things I could come up with but let’s hear from you; what marketing lessons do you think you could learn from Yosemite Sam?