A few days ago I was listening to a podcast where my buddy Richard Rierson had conducted an interview with Chris Brogan. I felt good for two reasons; one, I knew Richard had always wanted to interview him and two, he had interviewed me first, although that either means he valued what I had to say a lot or Chris was much harder to get than me. lol

Either way, as I listened to the interview I came to realize just how little any of us can know about someone else, even if we’ve read their books, read their blogs, seen their videos or had them comment on one’s blog not just once but twice. 😀

In any case, he’s a fascinating guy to listen to and see what he has to say. But this isn’t a puff piece about him; not at all. In taking a break from this week’s marketing test (click here in case you haven’t been paying attention) I thought I would talk about two takeaways from the interview he did with Richard and one I got from him somewhere else some years ago… one that I think is interestingly important since I keep saying that when I grow up I want to be rich and famous.

1. You’re never as famous as you might think you are.

Chris was asked by someone what it was like having so many fans online. He said that he didn’t take it all that seriously because in his own hometown he can walk down to the local coffee shop, get coffee and possibly something to eat, and no one there knows who he is. He can pretty much go anywhere where he lives and not have people running up to him because they want his autograph.

Before I’d read that line I hadn’t had it crystallize in my mind but it’s an absolutely true statement. My friend Kelvin asked me a couple of weeks ago if I listened to any new music because I’ve never been on Pandora. I told him I had years of music from the period of music I loved so I didn’t need any of it, but if something hit me from out of the blue that I liked I’d deal with it then.

Overall, I have no idea who most of today’s young musicians are. There are a couple of names I’ve heard whose music I’ve never heard so I couldn’t comment on any of it. The same goes for TV and movie celebrities; don’t even think about asking me about anything “reality” related. For that matter, I don’t know who 98% of all athletes are either, even on my favorite teams (Syracuse University basketball is the lone exception).

Thus, if I were working in a hotel and someone who thought they were all that said to me “Do you know who I am?”, I’d probably say “no”, mean it and move on. See, as much as I’d love to be rich and famous, the truth is that the only shot I have at it is to entice a specific group that’s interested in what I have to share, and only that group, and hope that I could get at least 33% of them to know who I am and trust me enough to listen to me and buy from me. Heck, maybe all it would take would be 20%; who knows?

Overall, we can’t believe in our own importance when it comes to others. Be comfortable in your skin and put yourself out there, but don’t believe that almost anyone other than your mother is losing sleep wondering anything about you; isn’t that sad?

In his interview with Richard, Chris threw out this gem and my eyes lit up. That’s because I’ve always believed this was a truth, even though most people you talk to in business will say it’s not.

Here’s the thing. I’m an independent consultant, and I spend a lot of my time reaching out to people in different ways. Sometimes I don’t expect to be contacted back because it’s typical sales; in other words, if I’m calling someone out of the blog and leave a message on an answering machine, there’s no obligation to call back because they don’t know me from Adam (have you ever wondered which Adam that phrase is talking about?).

I’ve had some people tell me I’m too sensitive sometimes, that things happen in business. Bah! People who treat others like that when it’s business related do the same thing outside of business. Whereas it’s easy enough to change behavior from work to personal, it’s much harder to change patterns. I evaluate people in business the same way I do in my personal life, and my patterns are intentionally the same as it relates to business and my personal life. Anyone paying attention to their behavior would see they do the same.

So… on this one… I’d ask more people to consider it and the way they treat others when they believe it’s just “business”.

3. No successful person is a copy.

This came out of the interview with Richard as well, and it resonated greatly with me. I have a friend who says that one of my problems is that I keep trying to do things my way instead of just doing what someone else has already done. My response to that is we can’t always follow what someone else did exactly and expect the same results. Times change, factors change… we should take the best that someone has to offer and make it a part of who we are without losing who we are.

To try to make a point, check this cartoon out (you might have to click on it to see it bigger; if you’re new to this you’ll have to click twice lol): 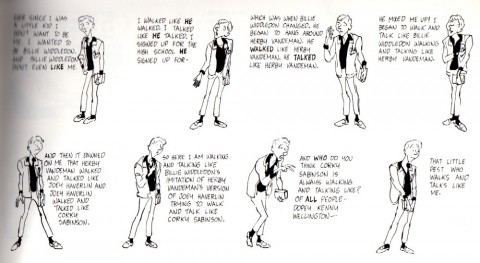 All of us are unique; that’s just how it goes. We can take lessons we learn from others and apply them to our life, but at the end of the day we can only be the best “us” that we can be. Think about the 5 most successful people you know, either personally or not. You might see qualities in each of them that are similar, but for the most part you’ll realize every single one of them is totally different and succeeded because of those differences. We can learn perseverance from them; we can’t learn to be them.

I’m thinking these are 3 pretty good lessons. Course, what I say doesn’t always matter so I’ll put it out to you and your thoughts.

6 thoughts on “Do You Know Chris Brogan?”