Back in June of 2001, I decided it was time to try to work for myself. I was tired of losing jobs because of things that weren’t within my control. On June 22nd of that year, I went and registered myself as a business with New York state and was on my way to a bit of independence. 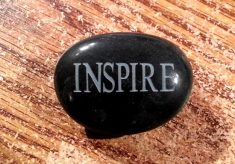 In October of that year I was kind of in recovery mode. I’d had one short gig, given a presentation on leadership in Ohio, my first live presentation, but was mentally still in recovery from what happened on September 11th of that year. I was starting to realize that I wasn’t really sure what to do; after all, when you work in most hospitals in the country there’s not really much advertising going on because most markets only have one hospital. Also, the business of health care is much, much different than any other, although at the time I was trying to be a consultant/trainer in the area of leadership and diversity; I still had no idea how to proceed.

I floundered for about a year after that, first learning of my dad’s cancer diagnosis, then attempts at stemming the tide, which were to no avail. I finished writing my first book Embrace The Lead so Dad would have some time to read some of it before he’d get to the point where he couldn’t do it anymore. Then he passed away and, though it actually took me years to recover from it, initially I was out of it and didn’t care much about anything.

By October of 2002 I was ready to try to get back to work, but I didn’t have a clue how to proceed. The first year, which turned out to only be months, had confused me and I just didn’t know what to do; didn’t know where to go.

Then I got a break. I heard about a meet and greet event at the Syracuse Chamber of Commerce (it goes under a different name now) and decided to check it out. There were a lot of people there and I did my best to press some flesh, if you will. However, the coup I walked into was grabbing the last remaining copy of the Chamber directory, which listed every single member. I figured this would give me a chance to find some people I might be able to talk to.

After a couple of days I’d marked all the people I was going to call. None of them were in my field, but all were either listed as consultants or sole proprietors. This was my first foray into cold calling, but since I wasn’t trying to get any business it was pretty easy to proceed.

If I thought this was going to be easier than prospecting, I was out of my mind. Instead of finding some souls who might talk to someone new to the business, not a single person would talk to me. At least 3 of them said that I could be competition some day and that it wouldn’t benefit them to talk to me; what the hey? There was only one person who talked to me longer than a minute, and he invited me to a meeting that would eventually lead me to join an organization called the Professional Consultant’s Association of Central New York. Years later I was on the board, managing their website, and writing the content for their blog.

That first meeting was illuminating, and not only did I become a member but I made a resolution on that day that whenever anyone contacted me and asked me for business advice, even if it was in my areas of expertise, that I was going to help them out. Although many people don’t believe me when I say it, I don’t believe anyone is my competitor. If there were myself and 9 other people who presented the exact same material to 100 people, each of us would walk away with at least a couple of clients. It might not be totally equal at the end, but it would prove that everyone has an audience, someone who’s ready to listen to them for advice over someone else.

That’s why over all these years I’ve worked to give advice and help people out, when I’m not trying to entertain them. From the 5th post I wrote on this blog talking about SEO & natural search through my Saturday post on ways business blogging can help, I’ve tried to offer a lot of help on the concepts of blogging and writing, SEO, social media and a host of other things.

Sure, I deviate here and there, and I’ll go way off script with posts like talking about favorite children’s stories, but for the most part I’m trying to be helpful; why else would I have written a monster post on mobile speed and detailed all the steps I took unless I was trying to be helpful? It’d be much easier eating cake (mmmmm, cake….).

I’ve been a helper all my life; my wife used to always call me Dudley Do-Right but has appreciated that I’m always trying to do the right thing. I know I’m not alone in trying to help people; after all, there’s Donna and Ileane and Kim and Steve and Suzie and Dana and Chuck and a host of other people who, while trying to also get business, are in the game of helpfulness.