Hi Y’all! I’m back writing after taking two weeks off, although I did write one blog post about a local restaurant that irked me; hey, when you’re irked, write about it.

For those of you who missed it (which I don’t know how you could have), when I wrote my last post of 2015, I said that I was going to rest, then plan how I was going to proceed in working on my business and career in 2016. You know what? Things don’t quite work out that way just because you say them.

Although I didn’t really write, my mind was on writing most of the time. Thus, I have a lot of topics to write on because I saved them in Evernote. I tried meditation some more but my mind kept resisting; gotta overcome that. I spent 3 days with Mom and… well, let me just say that I know more about NCIS than I ever wanted to know. lol

I didn’t spend a lot of time thinking about business, which is a shame. I did spend more time thinking about how to forgive myself for not being perfect and great; isn’t that a shame? I’m not big on the term “forgiveness” when things seem or feel extreme, so I’ve retained some major gripes over the years with people I feel have wronged me or others in some way. It’s one reason why there are a lot of people I dropped in 2008 on social media during the presidential season that was Barack Obama elected and never given them a second chance; bad behavior rarely goes away.

I’m harder on myself than others, and there was a lot of things I don’t forgive myself for. It doesn’t mean I haven’t moved on and that I’ve stopped trying to do things, but it does mean that, when I’m trying to shut down and calm down that sometimes those things pop back into my mind, some of them going back decades.

Here’s a more recent example to show you the type of thing I go through and why I’m working on changes.

Got back home, turned the computer on… it didn’t come on. I was really upset with myself for my arrogance and stupidity, but I was going to remain calm. After trying all my tricks (I’m not bad when it comes to technology but I do have limits) and not having it come on, I decided to pop my hard drive into my wife’s computer so I could access some things before heading to the laptop.

Only… not only were there issues because, it seems, Win 10 integrates itself with whatever hardware it’s playing with and thus things wouldn’t work properly, but my wife’s computer wasn’t really powerful enough for me to do much. At that point I started hating myself once again because I’d bought her that computer a few years ago, knowing it wasn’t as expensive as mine but the specs seemed to indicate it would run better than it was. I realized that explained why her computer seemed sluggish to her… because it was.

After a long weekend I called a guy I know because I knew I needed to get my computer fixed. He was out of the office so I left a message. About 20 minutes later one of his representatives called and I outlined the problem. He said he’d call the other guy and see what they wanted to do. I came back to my office, decided to try the start button one more time… and the computer booted up; whew! I have no idea why it finally decided to play with me again but I’m a relatively happy guy once more.

At least I was trying to be. That Sunday night I had stopped at my friend Kelvin’s house because he’d brought some sweet potato pie back with him from visiting his family in Maryland. I was telling him more about my computer issues and how my wife’s computer wasn’t up to standard and how I hated myself for that. He said that I should cut myself a break because I did buy her a brand new computer that, at the time, was probably pretty good based on the standards at that time, and that I didn’t intentionally short change her to hurt her.

Until my computer came back on, I hadn’t really taken in those words. Once it did, and after I spent time making sure everything was back to normal, I thought back on those words and realized that I do beat myself up about a lot of stuff that had good intentions, whether they worked out perfectly or not. It reminded me of a post I’d recently read by a young lady named Anna who had recently turned 22 (gasp! lol) and, in talking about 22 things she’d learned by 22, her very first lesson was “Excellence is different from perfection” and her second “I don’t have to be perfect“. I wish I’d learned those lessons at 22! 🙂

It was in thinking about my computer, my wife’s computer, reading that post and a few other things that told me that I needed to decide on a direction for the year, something that would not only bring me what I’ve been shooting for but put me in a healthier mindset and lifestyle. I came up with one word that was going to be my word for the year, which oddly enough was a major topic of Kelvin’s just a couple of days later in his newsletter: focus.

That’s a lot of preamble just to get to such a small word isn’t it? If you’ve stuck with me this long, stick around just a little longer because the things I’m going to focus on might mean something to you and your life/businesses as well.

For me, focus means it’s time to pay attention to a few more things, be more conscious of others, and take more chances after thinking logically about them. Here are my points of focus for the year.

First, my health. This year my main goal is to actually sleep at least 5 hours in one night once a month. I got 5 hours of sleep in a night only 4 times in 2015 (per Fitbit) and that’s not going to get it done. It’s hard to concentrate, or focus, with so little sleep.

My secondary health goal is to lose 10 pounds, which should be small potatoes, but it comes with a catch. I actually have to lose 13 pounds, which includes the 3 pounds I gained during the holiday season. For me this actually means watching “how” I eat more than “what I eat”. My first two experiments of 2016 in my quest for this have had mixed reviews, but one will stay and the other I’ll need to figure out how to modify. When I actually fix this I’ll talk about it again… maybe. In any case, I’ve lost 40 pounds in 4 years, but lost 25 of those the first year, and I want to be better than that.

Second, I need to focus more on what social media outlets are working for me and put more time and effort into them.

Blogging is solid. Twitter has worked wonders and proven to me why I like it so much.

LinkedIn… I was going to shoot for 101 articles there to see if LinkedIn would start sharing more of my content, which had been dwindling drastically in numbers. However, after my last post there got only 19 views, I decided it’s time to leave it alone as far as a promotional vehicle. No more articles there, no more participation in groups… marketing and networking only from this point on. That will save me a lot of time.

Google Plus… it’s close to pulling the plug on my community there because no one seems to care. I may delete one of my accounts there also, since I have my personal account and my business account, although I need to make sure that doing so won’t shut down my business YouTube channel. Yes, I’d be keeping the personal one because the business account only has 7 or 8 connections after 3 years; that’s certainly not worth my time.

Facebook… well, after the posts that are already planned for it in January, I’m not posting anything for the rest of January just to see if anyone actually misses it. If not, I will probably finally shut that page down. I may also shut down my diabetes page, but that one’s up in the air. I administer a music page and I’m definitely going to back away from that.

Third, I want to improve my writing in one major way; I want to stop writing passively. It turns out that my favorite 3 words to begin sentences with when writing are “So, Well, and Thus”. I also begin a lot of sentences with maybe one or two words, followed by a comma, and then proceed with my thought. That’s passive writing, and though that kind of speech serves a great purpose when talking to people, it doesn’t make as much sense when writing. If I write a sentence like “supposedly eating spinach is healthy”, it carries a lot less weight than “eating spinach is healthy”. Writing the first way absolves me of responsibility for my words because I’m not being definitive… that’s just not going to work anymore. It’s not going to be easy… hence, “focus”. 🙂

Fourth, I need to get over this business rejection thing. I’ve been in business 14 1/2 years, yet I have long periods of time where I won’t send an email or pick up the phone to make a call because I don’t want to be rejected or ignored. That’s business; you keep plugging away and eventually you find those folk who want to work with you. I know this yet it can be discouraging pounding your head like that. I also know it’s not personal; how could it be since these people don’t even know me?

To this end, I expect this will be the year that I work on creating email mailing lists. What I’ll do with them is another thing, but it’s time to really explore it further. I’ll also be putting together lists of potential clients for all the things I do and I’m going to work on getting comfortable with the phones and better at online research, where I’m actually pretty good already but, as it pertains to health care, is a bit harder to do for the information I need.

Fifth, and final for now, I’m going to look at criteria a bit better, figure out what I consider is really important, and spend more time on that, wasting less time on non-productive things unless they’re geared towards my health. Long term this should mean more production, better production, less time visiting sites with little to no value, more learning, more networking, and less to beat myself up over.

Right now this means more consistent videos, write or put together another book, look to doing a webinar or two, at least one local live presentation, a few speaking engagements, and fewer things to irritate me to the point where I’m not focusing on my own thing. It will probably mean writing more often here and in other places, and to highlight this there will be a post on Thursday as well this week where I’m going to talk about something I’ve recently done on Facebook to help my personal stream treat me better. One of my thoughts is that for some of my blogs I want to write articles ahead of time that will take care of the entire year first, and then if I come up with other things I want to say it’s extra content. If you remember, I wrote over 350 articles total in 2015. I’m planning on more in 2016; somebody stop me! lol 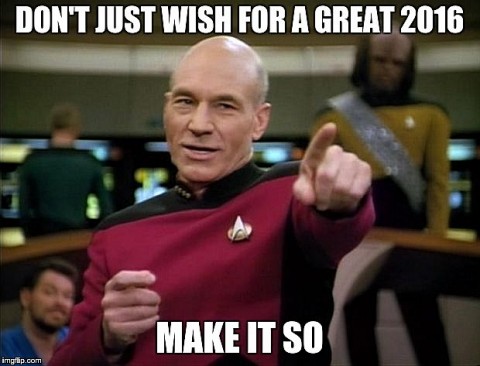