Over the course of just over 8 years of blogging I’ve had 15 guest posts here, the last one in 2013. Except for 2 of them, all the other guest posts were because I asked someone I knew to write about something I thought was pretty interesting.

In this case I’m highlighting my friend Kelvin Ringold, who I’ve mentioned in multiple posts on 3 of my blogs over the years and in many of my videos. Many local people know who Kelvin is, so I figured it was time for him to introduce himself to the other masses by writing a post on his main vocation, which is writing and talking about positivity. I owe this guy for lots of things over the years, so he gets a guest post; for the rest of you, don’t even think about asking. lol

He’ll introduce himself so I don’t have to, and I hope you enjoy the inspirational and motivational words he’s going to impart on you today. 🙂

Good day, my awesome friends. WELCOME to another day of… LIFE!

All things considered, I prefer life to most other alternatives I’ve seen, so every morning when I wake up pain free and moving on my own power, I consider that a really good start on a great day! And the rest of it is smooth sailing.

As you might have guessed, I’m the positivity guy: Kelvin P. Ringold, Prince of Positive, Oracle of Optimism — I’ve been dubbed by my fans. I’m the guy who can find the silver lining for any cloud; find an advantage in any disadvantage, because there’s Power in Positivity, and the mindset with which we face life determines what we get out of it, and it gets out of us. When you master your mindset, you master your life.

When I say that, some folks think that means that I don’t see negative things, that I ignore the pain in the world, that I run around with blinders on pretending that everything is perfect — but that’s not the case. What it means is, I don’t let those things define me. I am not my problems — and neither are you.

Those two approaches are very, very different, and in a huge, seemingly metaphysical way… if we continuously focus on the problem, we will reinforce and intensify the problem. So, for many years, I’ve dedicated my life to helping people develop mindsets and strategies to focus on and create empowering solutions. And I have a few steps you might consider.

You must first DECIDE you’re going to be positive. The question I love to ask is: how many happy NEGATIVE people do you know? In the past, I’ve said that casually and matter of factly. But the truth is, if you’re not already at least a borderline positive person, it’s not all that simple to make the switch.

We’ve been taught and conditioned since birth — and maybe before — to be negative. Much of that conditioning came from well-meaning people whose purpose was to protect us and make sure we “faced reality.” In the process they scared us, jaded us, told us all about our limitations and why we couldn’t do or be more, so don’t expect it; and since most of it came from people we loved and trusted, we accepted it at face value and it became fact in our minds. But they were wrong — or perhaps better to say, they were operating from a flawed perspective.

We CAN do and be so much more than we’ve been typically taught that we can be, but we have to accept that as a reality and work towards attaining it. So to become positive there’s a great deal of past conditioning we have to override — which we do by focusing on the solution. Once you decide you’re going to be positive, then the work will start.

We are bombarded by thousands and thousands of messages each day, and many if not most of them are negative. We don’t “notice” most of them because we are deletion creatures. We tend to tune out things that we don’t need to directly interact with, or focus on to survive, but the subconscious mind still processes that information. NEWS these days is a melodrama. You only hear the bad, usually at a time when you’re eating or having quiet time. They charge it with emotion and innuendo to get your attention and reaction and RATINGS and leave US with the stress & anxiety while the advertisers pitch their products.

Emotion is one of the triggers that the subconscious mind pays attention to, so negative info charged with emotion (like the news) penetrates the veil and is planted in your mind. TURN OFF THE NEWS for 30 days and you’ll be so much happier that you’ll likely never turn it back on again. I stopped watching the news for the most part in 1989. Life is good. BTW… if you can wean yourself off Facebook, you’ll drop another few points of negative input. Just saying!

No better place to learn to master your attitude than by hanging around people who have mastered their attitude. Positive people are calmer and more resourceful under stress, they typically put things in perspective and don’t respond with unbridled emotion, and they are solution focused. They learned to tune out the negative triggers — or at least put them in perspective. Birds of a feather flock together. Check your friends. If they’re all hyper and grumpy… well… think about it 😉 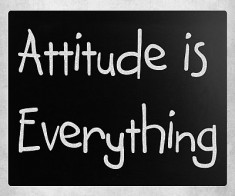 Gossiping around the water cooler, finding out about who did what dirt, listening to the office scuttlebutt… bad for you. Negative. It plants negative, creates suspicion and other negative feelings. Causes stress (what if they’re talking about ME like that behind my back?) Learn to disengage if it starts around you — go potty, remember that appointment you’re late for and get away from that. Refraining from negative self talk, again, is tougher than just saying it. It’s a habit.

You talk to yourself all day — constantly, and most of it is negative. “I’m such an idiot; why did I do that?” But you can at least become aware of the things you’re saying to yourself. Once you’re aware, then you can start to eliminate it. For me, when I notice myself talking negatively to me, I just say “stop it.” Sometimes I say it twice. But awareness is half the battle.

5. Read or listen to something Positive EVERY DAY (this does not include a newspaper — except maybe the comics section.)

You need something to counteract all that negative stuff you’re hearing and thinking all day. You need to read something that says you’re a great person and how much potential you have, rather than what a loser you are. You need to read or listen to things that talk about how people have overcome adversity and won — rather than the latest disaster.

You see, there are miracles happening around us every day! People are winning EVERY day — but that doesn’t sell newspapers (what’s left of them) or news. And the best time to do the reading — just a few minutes — is just before bed. That way, your mind has something positive to process while you sleep, and you’ll likely wake up in a better mood.

Another good practice, is to pick at least one thing — and preferably 3 to 5 things — that you are grateful for that happened in your day. If nothing that day, go back in your mind until you find something to be grateful for and let that be on your mind as you go to sleep also. If you need some practice on the gratitude, I did a personal list some months ago. Maybe it will seed your thoughts.

6. Do Something Nice for Someone — and don’t let them know it was you 😉

I don’t have to explain that one. You felt good just thinking about it, didn’t you?

Check out the song “I Just Want to Celebrate” by Rare Earth on YouTube. It’s my goto pick- me-upper.

8. And, I admit, I do have one other favorite you might like. You might consider subscribing to my Daily Dose of Positive called “Vitamin K Daily” A positive message each morning, Monday through Friday, designed to be read in 2 to 3 minutes (usually) to give you an empowering start to your day. It’s $24.95 a year but you get 4 weeks free to check it out and you can unsubscribe in like two clicks, if it’s not for you. You’re not billed until the 4 weeks is up.

Experts say is takes 14 to 21 days to create a new habit. Follow this positivity recipe for 14 day days, and chances are you’ll never stop. Make a habit of being positive, and I promise your world will change.

Have an awesome day!

15 thoughts on “There’s Power In Positivity – By Kelvin Ringold”