For once this is going to be a relatively short article. It’s possible comments could be long or many; we’ll see how this goes. 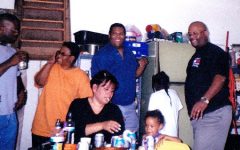 First, a preamble. Back in 2012, I posted my first article on a series of posts I was going to put out on every Friday called Black Web Friday. This came as a result of seeing a post on Problogger where this woman put out a list of the top 50 bloggers in the world… and there wasn’t a single black person on her list. When I commented on it she said she didn’t know any, and almost all the other comments were directed at me saying she didn’t have to know any because it was her list. I wrote back saying she didn’t say it was her list specifically, and not knowing any black bloggers said more about her than me.

That’s when I decided I was going to try to help get the word out about black bloggers. So, for almost six months I posted at least 4 black bloggers every Friday, linking to their sites and letting them know I’d done it via Twitter. They weren’t all traditional blogs; some were news and entertainment sites concerning black people. I had a goal in mind and I wasn’t to be deterred.

Until… I realized that I was doing a lot of work and only a few people cared that I was highlighting them. One thing I’ve always said is that I’m not going to work harder for anyone else if they don’t care about it. Thus, the last one I did at the time was June of 2012; that was a long time ago. Then, because I just couldn’t stop myself, I did another post in 2017, where I highlighted a bunch of black blogs and websites once again.

That’s the last time I did anything; I was tired of promoting people who didn’t care. By the way, it’s not just black people who didn’t care; often it seems that when you share a link back to someone else’s blog or website and you let them know about it, overwhelming they don’t care… or at least they don’t let you know they cared. I’ve seen a retweet or two here and there, but little true acknowledgement.

Then George Floyd happened, and I’ve been in a horrible state of mind for the last month. I’m calming down now, which is always a good thing, and I’ve written some articles and done a couple of videos on the overall topic because creating content helps me get my mind set right.

Yet, this thought about what I tried to do previously came back to me. I decided it was time to give it another shot; only I’m not doing all the work this time around. Now it’s time for others to help out, whether it’s themselves or someone else they know.

Here’s the rules, or game, or whatever you want to call it. On this post only, I’d like to see people sharing links to blogs by people of color. Yes, I’m expanding it from just black people; when all is said and done, we’re all in this together. Just to let you know up front, putting a link in the comment section will automatically send your comment to my pending area, but if it fits the qualifications I’ll pull it out and make sure it’s seen.

On the first, I’m American and I’m looking to promote American people of color for once. We’re a highly overlooked group of people and I think a bit of recognition is in order.

On the second, before I get the first “isn’t this list discriminatory against white people” kind of comment, I want you to think about this in terms of Children’s Day. If you don’t know this one, a child goes to a parent and says “There’s a Father’s Day and a Mother’s Day; shouldn’t there be a Children’s Day?” The response from the parent is “Every day is Children’s Day”.

That’s how it is for people of color in the United States. As an example, out of the top 100 blogs on this list of top bloggers, there’s only one person of color (actually a group) on it. There are others in a way, but I’m of the opinion that if you’re Indian and you’re writing your blog in India that you’re not quite a person of color based on American standards… that and you’re not American for the purposes of this article.

There it is; let’s see what y’all come up with. Oh, one more piece of criteria is the latest blog post must be within 6 months from today’s date. Also, I was wrong; this wasn’t as short as I thought it would be… sorry about that.

28 thoughts on “Are You Willing To Share Links To Blogs By People Of Color?”