Two and a half months ago, I had to change my blog theme… or so I thought. I was internally traumatized for a day or so but finally came to grips with it. Luckily, a friend of mine figured out what I could do instead for my other blogs, but I’d already switched to this one, and I was getting used to how it looked. 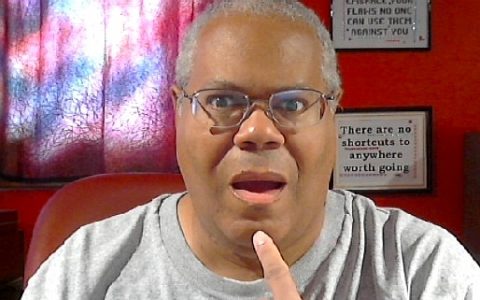 Who Knew?
Then, a couple of weeks ago my friend Mitchell Allen started trouble; he’s like that. lol He’d read one of my newer posts and sent me an email. He wondered why there was a strike-through on the links associated with the images I had on that article, wondering if I’d done it on purpose. He also wondered if I’d messed with the CSS code; who, me?

Okay, I’m known as someone who’s always changing something, but that wasn’t something I did. Matter of fact, it’s nothing associated with CSS; it’s an indication of a broken link, which is something totally different.

On that particular article, all 3 images showed a broken link, and that didn’t make sense. All I’d done was link back to the person on Pixabay whose image I used, giving that person attribution as requested. I even clicked on the link and it took me right to the person’s page there; matter of fact, all of the links took me back.

However… what had changed were the images; they were no longer there under the names of those photographers. What was going on?

On a fluke, I decided to do an image search on Google. It turns out that not only were those images used multiple times, which I knew was possible, but someone else had been the primary photographer, and either they listed that image elsewhere or it was their personal property; ugh!

I’ve had articles here about images and copyright in the past. My friend Scott Thomas wrote about images and copyright laws back in 2010 that was important. I wrote about an image copyright problem that hit my accountant’s blog (I created her website and blog, and I write the articles for it) because of a graphic that was in the free theme I used. Then in 2016 I talked about starting to use more of my own images more often, which goes against the grain of what some online marketers believe you should do, without mentioning that I’d had my own Getty Images hit from a post 5 years earlier; ugh again!

The thing is, if I’d never had to switch to the new theme, I’d have never known this was a problem. I haven’t had a single strike through on any of my other blogs, nor on my accountant’s blog. I also thought Pixabay, who I’m not linking to, was a safe place for images, but it turns out there are other articles warning about Pixabay images not really belonging to the photographers out there and that you could be putting yourself as risk by using them. Have I said “ugh” yet?

Well… this puts me and a lot of other people in a bad spot. Adding images to a blog post helps break up the tedium of reading a long article, and it can help bring attention to it when you’re promoting it. It’s not always easy finding articles that match at least some part of the theme of what you’re writing about. Even though I have lots of pictures I’ve taken over the years, most don’t have any people in them, which always helps because they bring personality to the article.

Turns out that, unless you’re the one who took the picture, you could still be liable for damages if the original photographer doesn’t have a model release form. Even using an image from a site like Flickr that has a Common Creative license saying you can use it for commercial or personal purposes might not be safe because they don’t always verify the ownership; here’s another “ugh” for you…

Well… what do you do with this information? I’ve basically got 10 years worth of image use, across 5 of my blogs and the blogs of others. I don’t have the time to go back and look at all of them, but do I have the money to pay if they’re found on my blogs? Do you?

Since I can see the strike-throughs on this blog, I’m going to be taking some time and reviewing those images, probably removing them and adding one of mine instead. Looking each image up on Pixabay is time consuming, and switching to another site like Unsplash isn’t secure either.

Going forward, y’all might see a lot more of my face; sorry about that. lol You’ll also get to see what interests me enough to take a picture of it. What will you do to protect yourself now that I’ve given you warning about what you might be up against?

28 thoughts on “Is Your Blog In Danger Because Of The Images You Use?”