Yesterday was a sad one for me. I went to the funeral of a young man who I actually held in my arms as a baby. That was a first for me, as I also took the picture you see here to make it the only 2 pictures I have with him in it, the first being me holding him & my niece Krystal as babies, him just over a month old and her 2 weeks old.

Ryan, the young man in back

The funeral was held at a church that’s morphed over the years I’ve lived in this town from a tiny traditional building into what I’m calling the central New York version of a megachurch. It won’t hold anything like 10,000 people like you have in the south but yesterday it easily held over 300 people, and could have held a lot more.

To say that the service was nontraditional would be an understatement. The ceremony began with 3 songs, two by a band and one solo; no choir whatsoever, although I thought it was coming. There were basically 4 presenters as pastors, and even that was different because each of them has other jobs; two are lawyers, one is an accountant (who was also the father of the young man) for the church and the other… well, I never figured out what he does except play the piano, which he did a couple of times.

Later on, after I had some time to break the ceremony down in my head, I was thinking how different it was than anything else I’d ever gone to. Then, as I thought more about it, I realized that in actuality I’ve been to way more nontraditional ceremonies, at least in my mind, than traditional ones.

My dad’s funeral was traditional, even though it was only the 2nd I’d ever been to. So was his twin brother’s, my wife’s father’s and my grandmother’s. All the nontraditional ceremonies were for folks closer to my age or, in this case, much younger.

I thought about it some more and realized that what seems to be taking place is that as time passes and audiences change these religious institutions start changing to appeal to their audience. They’re not afraid to take risks and they’re not afraid to possibly alienate older members, many of whom will either go to another church or go ahead and adopt the new ways because, when all is said and done, they may hear the same message being delivered yet in a more upbeat and challenging way.

Over the years I’ve read probably thousands of blogs. I’ve read many blogs on blogging, social media, writing, making money… you name it, I’ve probably read it. I see so many blog posts these days that emulate what I’ve seen previously, say the same thing almost word for word, recommend the same staid things like “write high quality content” without telling anyone what they actually mean (if you’ve read some of my posts you know this one’s a pet peeve of mine lol), “write compelling titles“, “don’t be controversial“, “don’t write or comment on blogs outside of your niche“… ugh. 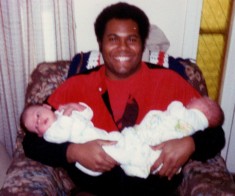 Ryan’s on the right, Krystal’s on the left

I’m not saying those aren’t necessarily good recommendations, although I’m also not saying they are. What I’m saying is that seeing new blog posts quote the same thing over and over, almost in the same language, gets boring and tiring to read all the time. I know, most of you probably aren’t seeing it as much as I do because of how many blogs I visit (I also see a lot more blogs these days because I’m on Flipboard) but I’d be hard pressed to believe that you’re not visiting blogs because you see certain titles that attract your eyes and, somewhere in your belly, you’re not saying “that sounds familiar; I wonder where I’ve seen that before…”

Last week my buddy Adrienne wrote a post titled 5 Reasons Your Blog Will Fail This Year, and I made a general comment to two of her points, #2 & #3 (in case you go to read it, which you should) by saying that I wouldn’t want anyone to refine their writing so much to their niche or those they’re hoping to reach that, in their minds, they can’t figure out what to write about. That might seem like an apocalyptic statement, yet there are thousands of people every day who hit that wall and stop writing their blogs… I find that pretty tragic.

In other words, if you’re going to talk about a specific topic, find ways of saying it differently, or presenting it differently by trying to be more colorful. You can stay on topic, or you can even stray off topic and come back to the topic… like I did with this post. Goodness, I can’t think of how many times I’ve found something to compare blogging to and come up with at least 5 points about blogging by using those comparisons. Truthfully, all of them haven’t worked great but then even Shakespeare has a couple of plays that are dogs. lol

Not being religious, most of the time I’m hard pressed to find a good reason for someone passing away as a lesson for the rest of us to learn something new, or learn to appreciate something we either already have or need to find a way to get there. This time, in saying my final goodbye to my young friend Ryan, I hope I’ve passed on a little bit of wisdom in his honor. Please comment and share this one if you found it useful or compelling of even a little bit controversial; thank you.