When I wrote a post a couple of weeks ago asking How Far Would I Go, I mentioned that I was in a story contest to try to win a free Kindle. Well, I didn’t win, and I can’t say I placed since I think there was only the main prize. Hey, that’s just how it goes sometimes. 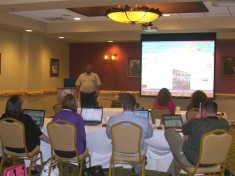 However, I did get one critique on the story, which was a drastically cut down version my tale on meatloaf. The guy said he liked the story and laughed at it, but that I used the word “I” too many times and that if I’d tightened that up then the story might have been stronger.

Let’s talk about storytelling for a moment, if I may. Back when I wrote my series on book writing, I talked about the art of telling a story. People love stories, and the better you can tell your story, the more people love to hear it. My dad loved telling stories, and I think I got that from him. Our friends Charles, Allan and Jessica tell some wonderful true life stories. And of course there’sHyperbole and a Half; ’nuff said.

If you’re telling a story in general, it’s often recommended that you try not to use one or two words over and over. For instance, if you’re writing fiction and your story’s main character is Henry, you shouldn’t always be writing “Harry said” or “Harry thought” or something like that all the time. The idea is to weave Harry’s name in there every once in awhile to make sure everyone knows when it’s Harry or someone else, but otherwise try to make one’s story flow better by not stopping on every sentence by saying “Harry”.

That explains writing other stories; what if you’re telling your own tale? Suddenly the rules change, at least in my mind. It’s would sound silly if you were trying to convey your thoughts and you said “there was this thought that” or “Johnny wondered” if your name was Johnny.

If you’re telling your story one would expect you to use “I” most of the time if you’re in it. For instance, I was the main protagonist in writing my stories on The Keys or the poker tournament I was in back in 2009. How else would I have told those stories without the word “I”? If it was fictionalized maybe one finds a different way, but if I, or you, are telling our own story, how ridiculous would it be without “I”?

Stories can be short or long; in essence, they are what they are, as I stated in one of my posts on better blogging. Stories need to follow a progression; not everyone likes stories that suddenly go back in history, or take sidebars that don’t seem to have anything to do with the story.

We want it direct, in order, fleshed out as much as needed, and then concluded in a way that makes us feel something; happy, upset, or even laughing. And if it’s your story, we want to know how you felt, what you thought, and if you have to use “I” often then so be it.

Of course, I could be wrong on this, but I doubt it. As I was reading Traci Lords book Underneath It All, I was struck by this thought; how could she have told her story otherwise without the frequent use of the word “I”? She couldn’t; that’s the point. If you need to use it, use it as long as it’s about you.

If it’s not about you, or you’re telling a story about someone or something else, then it shouldn’t be an issue with that word, but you need to be careful in looking at the words you do use to see if maybe there’s another choice every once in awhile.

19 thoughts on “The Art Of Storytelling”