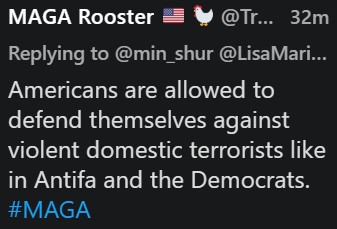 Stupid 1
However, some of those folks don’t want to have to go to a place like that. From their perspective, it’s not as much fun as if they exhibit their thoughts against people who don’t want to hear it. So they’re staying on places like Twitter, LinkedIn and of course Facebook. Some of them are saying things like what you see above.

On a place like Twitter, people can use fake names like above. On LinkedIn, you have to use a real name; they’re the best at tracking down fake profiles and eliminating them. You’d think people wouldn’t want their business showing bad behavior, but they don’t seem to care. What do they care about though? Glad you asked.

A couple of weeks ago someone I know left a comment on another person’s LinkedIn post. He’d been flagged for harassment. The harassment… copying hateful things people said and posting them via his profile… with their names, faces and places of business.

The first question is why is this harassment? After all, they felt comfortable saying it on LinkedIn in the first place. They didn’t care about anyone knowing their names, seeing their face and where they worked. Suddenly they were shy because someone else shared it?

The second question is why were they that stupid in the first place? Many people have lost their jobs being stupid; many companies have had to disassociate themselves from something their employees have said. A few businesses have stuck with “what they say on their own time is their right to free speech”… only to rescind that when people start protesting, the press shows up wanting some answers and business starts slowing down.

I’m not afraid to have an opinion. I usually express myself a bit more diplomatically than people on the other side do. So when I did a video like the one below, I chose the term “ethics” when I really wanted to use a stronger term:


https://youtu.be/CecHa2wfWaM
On this blog and my business blog, I’ve talked often about why freedom of speech isn’t really free. Everyone wants to have freedom of speech, but most don’t want to accept the potential consequences of it.

That’s another thing folks on Parler are going to learn pretty quickly; there’s different levels of hate speech, and some folks are going to be uncomfortable with it. What I expect is some of those folks will leave that site when they either get scared or someone threatens them like what’s going on right now with Tucker Carlson (never thought I’d mention his name… ever!), who hated himself by telling a truth he didn’t want to tell, and has been lambasted by his followers all weekend. That’s the first ethical thing he’s ever said (yeah, I said that!). 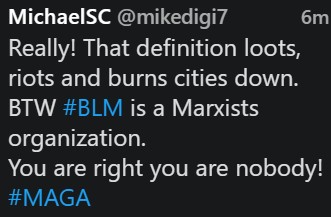 Stupid 2
As you see, I’ve shared two fairly stupid statements in photos in this article. They’re both from Twitter, and to find them I had to temporarily go around a term I usually block to find them. You can try to find them, but I suspect both are fake accounts, or at the very least the owners are using fake names.

I’m not worried about sharing their words; after all, it’s their words, not mine. This blog is also my paid space; if I can pay for the right to say what I want to say, let these other folks do the same; either that or stop being so hateful…. and stupid.

At least that’s my opinion; are you willing to share yours?

8 thoughts on “Is It Harassment If Your Stupidity Was Shared With The Public?”