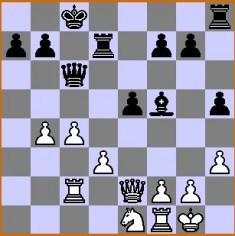 I guess that qualifies me to write a post comparing some aspects of chess to some aspects of blogging. After all, I’ve compared blogging to poker, a toaster oven, and Harry Potter. So why not, right? That and Sire dared me to. 🙂 Here goes:

1. A big part of chess and blogging is about consistency.

With chess, there are moves you develop as your beginning that you’ll almost always do unless you’re very proficient at the game. You do that because what happens if you don’t is you end up losing to someone who’s been hoping you’ll do something stupid early so they can crush you.

In blogging, consistency means you establish how often you’re going to write and then you try to stick to it as much as possible. If you decide to alter things, you do so with both a practiced hand and by running your own version of analytics to see how it’s going. If you change up either by suddenly writing drastically less or a heck of a lot more your audience might not know how to react to it and thus your game isn’t as tight as you’d like it to be.

2. Every once in awhile you have to shake things up.

Whereas consistency is a good thing for you, if you’re practiced shaking things up here and there could work to your benefit. Back when Bobby Fischer beat Boris Spassky in 1972, one of the turning points early on was Fischer changing from what everyone knew was his opening move. Spassky was so thrown that he never made a move in the game and resigned.

In blogging, safe is nice and comfortable but people need to be inspired to want to come to see what you have to say next, and that doesn’t happen unless you shake things up from time to time. I wonder how many people thought I was going to write a 2,800 word post on being happy a few days ago, or knew I was going to tell a story about my battle with a wasp, which I won. 🙂

3. Both chess and blogging are predicated on the concept of a good beginning, middle and end.

There are thousands of chess books dedicated only to opening moves; experts consider it that important. There are also thousands of books dedicated to what they call the “end game”. The middle offers millions of possible combinations, yet it’s those middles that result from the beginnings and lead to those ends.

In blogging, at least for me, the best posts are told like stories, and every good story has a great beginning, middle and end. The introduction usually tells people what’s coming, or in some fashion brings them into play. The middle is the really interesting part, the meat if you will, because hopefully the writer gets you engrossed in some fashion such that you can’t wait to get to the end. The end… well, often it’s kind of anticlimactic in blogging, but many will tell you that if you’re trying to make money then how you close is really important, the “call to action” if you will.

4. Going for the draw or storming the fortress.

Two months ago Mitch Allen and myself wrote a joint guest post on one of Vernessa Taylor’s properties titled This IS a Game. It’s Your Move, a look at small business from the perspective of chess, which is probably why I thought I’d already written a post here on chess. We were asked to talk about what we saw was our most important business lesson as related to chess. I stated that sometimes one has to go for the draw when one needs to find balance in what they’re doing if they’re not already on top of things. Mitch wrote that a player can’t go after their goal without some kind of plan as to how they’re going to win in attacking the fortress the other player sets up.

Blogging is kind of like that. Unless it’s a blog like this one that doesn’t have a niche, you almost can’t afford to blog without having some idea of what it is you’re planning. Now to be truthful, I have set myself up so I can write about anything I want to, but I do also have plans. For instance, you know about Black Web Friday; that is planned. You know I write mainly about blogging and social media; that’s planned. Almost every subject I write about on a consistent basis is part of a plan. I don’t deviate all that often from the plans for this blog. I expect that’s why people come back; even though they don’t know what I’m going to talk about next, they do know that there are places I’m not going to go; this is a safe zone, no matter what topic I address.

5. If you play enough chess or blog enough, you’ll get better and find your rhythm.

When I started playing chess against people who knew what they were doing, I was losing a lot of games in about 10 moves. That was embarrassing to say the least. These days I’m not so easy to beat, even if I still don’t win them all (or even most of them against Mitch; Sire and I are pretty much equal). Yet I’m not a pushover; I have my set number of moves I want to get to, and I usually get there if I play someone more than once.

With blogging, I don’t have a set number of words, but I do have a style I like to maintain. This blog is more than 4 years old now, and if you have the nerve to look at the early posts and compare them to the newer posts, you’ll see that I got better at it. The same goes for my business blog and my newsletter; time and practice makes you better at everything. And with both chess and blogging, you get to do it over and over, so you can’t help but get better.

33 thoughts on “Comparing Chess To Blogging In 5 Moves”