Over the course of the last couple of months, YouTube has done something incredible… not in a good way. They’ve taken the time to go through the 332 videos I have on one of my YouTube channels and decided that 12 of them aren’t suitable for advertising. 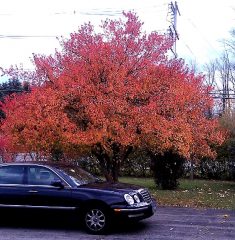 own the car, not the tree

For those who aren’t initiated to the process, if you have a Google Adsense account (Google owns YouTube), you can decide to monetize your videos and allow an ad to show up in different ways but in the same format you’re used to seeing on some websites or blogs you visit. All one has to do is click on a tab called Monetize and then put a check mark in a box and save; that’s all it takes.

For years I had a policy where I would only monetize videos that hit at least 100 views. As you can imagine, that meant I was hardly monetizing anything. After reading a couple other blog posts where the writers said it’s not the numbers as much as reaching a particular audience I decided to monetize almost all of them right from the beginning so I wouldn’t have to go back and do it later. I did this same thing on my business YouTube channel.

I was making very little money, even from the one video of mine that has almost 36,000 views. I get it because I never set it up so people had to watch the entire ad before they got to watch the video. That irks me a lot, and I’m one of those people who doesn’t do things to others that irk me; I’m good that way. 🙂

Still, I’m making nearly $2 a month… yup, all that’s for me! I figured if I got my numbers up that the skies the limit.

What I never expected coming down the line was that Google would find any of my videos unsuitable. I’d read about the process coming and the topics they were going to be looking at, and none of my videos contained anything that was on their list. I don’t cuss; I don’t use other people’s music; I don’t spout hate speech. I mean… what could they possibly be seeing?

That’s one of the problems; they don’t “see”. You get put on a list pretty early based on the title of your video; that’s the first stage. The second stage is if someone complains about a video. The third stage is if the creator has a pattern of a certain type (if you cuss in a lot of your videos they’re probably going to remove monetization from all of them).

I went back to look at all of the videos they decided weren’t compatible with advertisers. I can see where two of them might be pushing it a bit, yet there’s another video of mine that they left alone that should be on the list with the other two; if they’re blocked from monetization why not that one? The other 10 don’t make much sense if anyone watched them; the best case scenario is someone didn’t like what I had to say and reported them… though I have no proof of that.

The reason I have no proof is because Google doesn’t tell you why your video’s been flagged. They give you the option of asking them to review it… but there’s a caveat. The caveat is that they only review videos that have at least 1,000 views. None of the videos they’ve demonetized of mine has anywhere close to that many views.

The strange thing about it all is that one of my demonetized videos only has 36 views, and there’s a note Google popped on it saying it was confirmed by manual review. I didn’t ask for it, so why did they look at it? If they looked at the video, how could they still demonetize it?

The lucky thing for me is that I’m not really losing any money off the deal; it’s just irksome. However, a lot of long time YouTubers found their revenue stream suddenly taking a major hit though. When YouTube rolled this process out, they didn’t just go after new videos; some of those folks started losing revenue from videos upwards of 10 years ago. Two of my videos were from 2013; really now…

I’m luckier than most people though. Every video I’ve created I have on my computer. Even those that were streamed at one point I’ve downloaded. This means I can use all my videos in other places if need be, including my blogs. I’m going to be sharing some of the videos that got demonetized at the end of this article that I disagree with, just to prove that point.

At least a couple of times a week I see where someone has lost all of their content because they’re using a platform they have no control over. Many times these are people using free blogging sites instead of paying for a domain name and hosting company so they can do whatever they want to do (as long as it’s legal). I also see people who get banned off sites like Twitter and YouTube who suddenly can’t access any of their old content (it’s messier with YouTube than with Twitter).

I don’t like to write on sites like Huffington Post or Medium because someone else is controlling my content. I’ll write for other people but they’re paying me for it, which means it’s actually their content. On my sites I can advertise products I create like the books there on the left, and occasionally I can advertise an affiliate product such as when I do a book review. If you’re going to put all your eggs in one basket, make sure it’s your basket.

To make sure you’re going to retain ownership, you need to control your own content. I may put videos up on YouTube but I have all the originals on my computer. I may post a link or article on LinkedIn but I have the original. I may try to market an affiliate product but I’m also marketing my own original products. None of my books are on Amazon; go ask someone who’s written a book and put it on Amazon how much they actually get paid for us and you’ll understand.

This video is titled “You Don’t Have To Be The Best”, and the purpose is to motivate people by telling them that they don’t have to be #1 to be successful:

This video was titled Being Assaulted For Your Freedom To Speak?, where I talk about why it’s bad that people are assaulted for saying whatever they want to say, even if I disagree with what they’re saying and warn about potential consequences of that speech.

This video was titled Do You Excuse Bad Behavior?, where I talked about removing people who violate one of my moral standards from my life and why others should do it.

My next video was titled Advice From A 50+ Person On Suicide And Depression, where I addressed a young man who wrote on another video that he’d been thinking about suicide because he hated his life and why he should rethink that position. In this case, he saw the video and thanked me for doing it.

This very short video is titled Taking Unreasonable Risks, and I ask the question what they consider an unreasonable risk and whether they still do it or not. I’m missing why this one was selected:

I think that’s enough to make my point. If you saw anything untoward in any of these, go ahead and let me know. In the meantime, if you’re a creator evaluate how and where you’re putting your content. Make sure you have owners rights; you might need them some day.

Meanwhile, I’m going back to my original policy of only monetizing videos once they reach 100 views. Why allow Google to show ads on videos that I’m probably not going to get any money for while delaying visitors from immediately seeing my video? At least they only killed one of my videos that had more than 100 views. 🙂