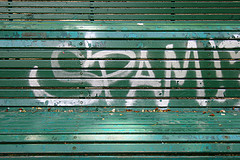 Most of the time I talk about spam it’s commentary more than anything else. In one post back in September, I told you how to identify spam on your blog.

This time I’m going to give you some actionable steps to reducing spam, or at least have it going into the spam filter so it’s not showing up in your comments area.

Unfortunately, there’s little to be done to eliminate spam totally. You can moderate your blog, but anyone who reads this blog knows how much I hate that (and yet so many of you still do it purposely; oh well…). You also know that sometimes there’s false spam, such as when I talked about certain browsers sending comments into the spam filter for some goofy reason.

So, we’re going to take on the next big thing, which is reducing it. Based on settings, you can probably reduce it more than mine, or you might decide you don’t want to go as far as me. I give you the steps; the settings are all yours. Here we go.

1. If you’re using a WordPress blog, in your Admin area go to Settings, then down to Other Settings. The 3rd item down says “Automatically close comments on articles older than”, and there’s a box next to it. You can check the box on the left, then put a number of days in the box and at that point in history comments will turn off.

The beauty of this is the majority of spam that comes in goes after older posts that you’ve pretty much moved on from and this takes care of that issue. The negative of this is people might read some of your older posts, especially if you link to them like I did above, but they can’t comment on it. You get to decide which of these is more important to you but truthfully, you’re always going to have more activity on your newer posts unless you’ve posted something very constructive that people can use… like this post. 🙂

By the way, though I mentioned the biggie, there are plenty of other things here that you can alter that will help block some spam. I have anything that has links in a post go to the spam filter, and I also use the comment blacklist option to block certain words and sometimes certain IP addresses, which is shown to you next to all comments, blocked or not.

2. Turn off comments on select posts. Most people won’t like this for their WordPress blogs but sometimes you might have a post that’s more of an announcement or maybe a sales post or, I’ve noticed from some bloggers, a post that’s so personal you can’t bear someone intruding their own thoughts into it.

This can also be used if you decide not to use what I gave you in #1 because you want some of your posts to always be live. This way, you can pick and choose; that’s pretty neat.

3. Add images to your blog a different way. I’ve also noticed that much of the spam that seems to make its way through does so through the image area, which is really weird. I mean, what program is it that’s addressing the image on a blog post instead of the post itself?

This can be defeated in two ways. One, you can decide to upload an image you want to use to your server, then when it’s time to add an image add it via a link instead of uploading it from your computer. I picked up on that trick on a fluke and it works pretty well. The downside to that might be if you don’t have unlimited storage or little storage via your hosting company. Overall that shouldn’t be an issue.

Something else you can do is add a plugin that’s connected to a website that supplies images. I heard of one the other day called, I believe, Pix 500, but I use one called Compfight. It’s tied into Flickr’s Creative Commons images, which means it’s done the work to determine which images bloggers are allowed to use ahead of time, thus no copyright issues. It has its own settings that you can alter within the Admin panel so that if you like a certain size of images each time you can make it so. Ah, I love when my inner Captain Picard comes out. 🙂

4. Use the GASP plug-in. By now, if you haven’t heard of this plugin you’re years out of the loop. It not only helps reduce spam to the point that you can alter settings to block certain types of spam from ever getting to your blog in the first place, but you have multiple selections you can make such as determining whether someone has to stay on your post for a certain length, determine if they have to write so many words, or even verify trackback links to see if those sites are legitimate.

I’m not going to get too deep into the settings on this one because there’s a ton. Instead, I will say there are good and bad things about this one as well. The good is obviously eliminating as much spam as you want to from ever getting onto your blog, which means you don’t have to moderate anything… well, almost.

That’s part of the bad. Sometimes it’s so strong that it starts blocking people who’ve come to your blog for years, who you sometimes give a free pass to a short comment or maybe they’re responding to your response to their comment. Sometimes having these things go to your spam filter isn’t a bad thing at all. After all, blogs are supposed to be about engagement, so there should be some allowances here and there; don’t you agree?

I think this has gotten long enough so I’m going to stop there. These tips should drastically reduce your spam on their own, and if you tweak some of the other settings you can reduce it even further. Good luck with it all and let me know how it works for you.

42 thoughts on “4 Ways To Reduce Spam On Your Blog”