well again i would say that its a nice post. The athor is really a good writer. 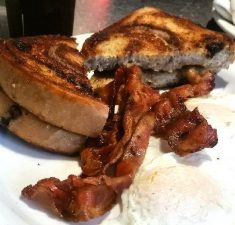 Sigh… then I realized that I’d just written a post about fake and lousy comments in October, which made me think it was too soon for another post about them. Instead I decided to write about… breakfast.

Three days a week, someone comes over to take care of Mom in the morning. Unless there’s a doctor’s appointment, she sits with Mom for around 2 hours. This gives me a chance to get a little bit of time for myself, and I use the first part of that going to the local diner for breakfast.

Overall, it’s a typical breakfast. I order two eggs, either scrambled or over easy, bacon, and… grilled raisin cinnamon toast! Because they grill it, the taste is much different than what I’ve had at any other restaurant in the area.

It’s one of the major things that keeps me going there; that and it’s the closest place I can get breakfast that doesn’t take too long to receive. Every time I go, it tastes the same… unless I get this one lady, who I specifically have to tell that I want the toast grilled. If it’s not grilled, it’s just “bread”… not the worst thing in the world but it’s better when grilled.

I always take my Nook and I spend the time watching a movie I’ve downloaded, with my noise-canceling earbuds. It’s a very comforting time; it’s peaceful and enjoyable; it’s something I look forward to whenever I go there.

When I go to pay my bill, they always have cupcakes near the register. They always look tasty, but I rarely partake of one, trying not to have too many calories that early in the day. Still, every once in a while I buy one… and they’re always delicious. It’s a nice perk, a spice of life that breaks up the monotony, which in and of itself is still very nice.

You know what time it is; it’s time for me to relate my breakfast experience to blogging. As with every other time I’ve done a comparison of something to blogging, even when it’s been something goofy, I’m going to name ways blogging is like eating breakfast at a restaurant; however, I’m only going to name 3 things this time around. This should be intriguing… 🙂

1. Your most consistent visitors should know what they’re getting 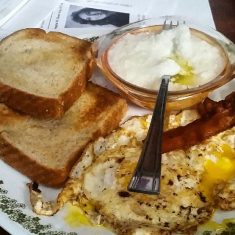 The best thing about breakfast is that it’s hard to mess up. Yet, it seems that it tastes different at every restaurant I go to. For instance, eggs can be runny and under-cooked, hard as pebbles, green (I’ve seen these; ugh), salty or without any spices at all. If you find a restaurant where you like their eggs, they’re going to be the same every single time… and you’re going to be happy.

Those who visit your blog often get used to something you write about that keeps them coming back. I like to think that my most consistent visitors come to see what I have to say about something they’re interested in. Whether I’m fussing about social media or bad comments, blogging or writing, telling stories or offering technical advice on something, I hope they feel like they’re getting something of value that’s fairly consistent with my normal topics.

2. Your most consistent visitors are going to want something different here and there

I mentioned two deviations from my breakfast routine. I’ll change up the type of eggs I order and sometimes I buy a cupcake to take with me. They change up the cupcakes, so I don’t always know what they are until I ask them; sometimes I have to have one of those wonderful cupcakes.

I deviate from my norm here and there. I might do a book review, warn about old plugins; I might even talk about diabetes since I’m diabetic. I like to think I can talk about different topics while writing in the voice that my regular visitors are used to. I could be wrong of course, but it’s what I shoot for.

3. Your most consistent visitors won’t be expecting perfection

The reality of blogging, aka writing, is that as much as you try, sometimes what you write isn’t up to your normal standards. Sometimes you’re not feeling it; sometimes you can’t get your point across properly. Just like I have the one lady who I have to specifically tell that I want my raisin toast grilled, there will be deviations; that’s just how life is.

The funny thing is that even if you think something’s not up to your normal standard, it could end up being popular. I was surprised to get so many comments on my article without commas; that was horrible!

On a different front, an article about popups on mobile I thought would get lots of comments only got 3 (Peter was responsible for 2 of those lol). The number of visits were tepid also. Maybe it’s just me who hates popups with passion; oh well…

When it comes to blogging, you can only do the best you can. Your regular viewers will see it and understand it. Sometimes they might even think it’s better than you do. Unless you’re Neil Patel, your numbers are going to be hit and miss. Go with the flow and try again next time.

That’s all I’ve got for today; enjoy your breakfast tomorrow! 😉