I think Bigfoot lives in my backyard. That may sound like the strangest thing you’ve ever heard, but if it’s not Bigfoot it’s something incredibly big, ugly, and dangerous that’s back there. It’s one of the reasons I hate the backyard. 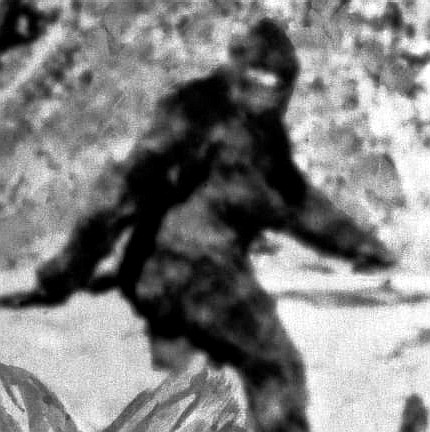 When my wife and I were looking at houses back in 2000, we saw a lot of houses that just didn’t quite work out for us. Some had one beautiful room and that would be it; others would have one floor that was immaculate but another floor that looked like squatters had taken over. We did see a couple houses that were pretty nice, but we just couldn’t pull the trigger.

Then one evening, after almost signing papers for a house that we really didn’t want, I decided to go online to see if I could find something I liked. In less than 15 minutes I actually did see something I liked. And one of the strangest things is that it happened to be on a street that I knew very well from my childhood; okay, from my teens, which wasn’t quite my childhood. The next day we called the realtor and asked her if she could set something up so that we could go and take a look at this house.

When we saw the house in person, we thought it was pretty neat. It’s a ranch style house, something I’d never thought about ever living in, but it had this look that we liked. It had been on the market for a long time, and the price had been reduced, and my wife and I being kind of green when it came to houses thought that we were getting a steal.

Truth be told, if I had listened to my Spidey senses the day before we signed the papers we might not have ever bought this house. Oh sure, every house has issues, and I can say this house has certainly has a bunch of them. One of the strangest issues this house has had has come from the critters.

Critters you say? You’re probably wondering what I’m talking about. The day before we bought this house my parents came to town so they could see the house we were buying. My mother came out with a phrase I’d never heard before, but it was pure her: “Not bad for a used house”. lol

My dad and I took a walk around the house, and for the first time I saw the mosquitoes. There were a lot of them and they were large, to the extent that my dad commented on our Jurassic Park mosquitoes. He wasn’t kidding, and we’d see mosquitoes in the past. I started to wonder what we might be in for by buying this house, but we went through with it anyway. It took us two months to move into this house because we still had two months remaining on the lease for our apartment. It also gave us time to move things over a little bit at a time and to take our time in painting the place.

During those two months I learned that I did not want to be outside at night when it was warm. I say that because I saw some of the largest and strangest bugs I had seen in probably more than 20 years of my life, and I saw those things briefly at the State Fair. I say briefly because I don’t like bugs; actually, I have a great fear of bugs of any size, so seeing large ones really didn’t enchant me all that much.

The first Friday evening in the house my wife happened to be working a second job, so she wasn’t coming home until really late. I was sitting at the desk of what became my office when I heard a noise in the backyard, as it happens to face the woods out back. Oh, I neglected to mention that we have woods behind the house. I would call it a forest but my wife would say my words were overkill. In the middle of the woods somewhere is a swamp and a stream of some kind; we’ll come back to that.

The noise. I swear to this day that it was some kind of loud, dangerously threatening growl. I don’t know what kind of growl, but I know it wasn’t a dog. I also know it was kind of loud, and it sounded like it was close to the house, and I didn’t like it. What have I seen? The two things I’ve seen most often are the deer and the rabbits. I can handle the rabbits and most of the time I can handle the deer, but I hate the deer when they decide to run across the street while I’m in the car, and that has happened a few times including right in front of the house.

I see the hawk that likes to circle the sky, although truthfully I can’t tell you if it’s the same hawk all the time. I saw my first chipmunk only a few years ago, and now we see those things all the time, as one of their favorite hiding spaces seems to be a little space underneath the siding in the front of the house. I’ve seen squirrels, snakes, frogs, foxes, coyotes (or coy dogs; I can’t tell the difference but I hear we have both and they both have big paws), turkeys, turkey vultures (some of the biggest and ugliest things you’ve ever seen), skunks, opossum, those big fat fuzzy things that run very fast that might be groundhogs, the largest crows I’ve ever seen, moles, mice, and of all things something called a star faced mole, which ended up in our basement. The exterminator we called to come verify it didn’t believe us until he got to the house and looked at it, then said not only are they very rare but that it’s extremely rare that they end up in a house because they can’t see, which was why he didn’t believe my wife when she told him she thought that’s what it was (the Internet can be a wonderful thing but when I saw a picture of this thing I wasn’t very pleased).

So I haven’t seen Bigfoot, and I haven’t seen a bear, which supposedly was running around this area a couple of summers ago, though slightly north of here. Based on some research, I don’t think there’s a bear in the swamp for two reasons: one, because bears don’t like swamps; two, because that sound I heard all those years ago didn’t sound like the kind of noise that bears in this area would make, or so I say. I know the noise didn’t come from a coyote because coyote sound like women screaming, and I know it wasn’t the fox because the foxes sound like little dogs.

I also have never seen the bats that I know have to be out there, but they don’t roar. We’ve never seen the mosquitoes as thick as they were the year we moved here (probably because we cleaned up the area and hired a guy to maintain it), but I’ve seen some very weird and ugly creepy crawlies that just make my skin crawl. And what’s the deal with the ladybugs?

My wife said she’s seen a quail, and of all things, we also think there might be some storks or cranes or whatever those things with the really long legs are from time to time, which we see at the lake. Strange, but for all the seagulls in the area, we’ve never seen one setting down in the neighborhood. But none of these things growl, so I know it’s none of them anyway.

The reason I keep thinking it’s Bigfoot is because I remember a movie from 1973 called the Legend of Boggy Creek that scared me so much I was afraid to walk home, and I would swear the noise I heard sounded just like the noise that Bigfoot made in the movie. I remember that night because I swore I heard Bigfoot following me, even though I lived on an air force base, and I ended up running home, which was the first of two times I ran home (I also ran home when I left the movie Night of the Lepus early; I can handle aliens but these things?).

I’ve told a few people about Bigfoot being in the swamps out back, and all they do is laugh. I know one thing; I’m not going out there to track him., but I did eventually end up in the woods one night as the sun had gone down and it was kind of cool outside. Bigfoot doesn’t like the cold, and though we get lots of snow, we don’t get enough for a yeti to be out there. And I filmed it; check out the video below:

16 thoughts on “Bigfoot Lives In My Backyard”