I found this to be an interesting turn of events, thus I’m sharing another repurposed article from years ago. Every once in a while I write reviews of things, my opinion on a book, movie, software, etc. Most of the time I don’t know the people all that well, although on this blog I wrote a review of Beverly Mahone’s book How To Get On The News Without Committing Murder and I know her fairly well. 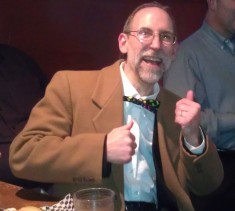 In that vein, I once wrote a book review on a book by someone I’d known for 10 years at the time titled Paid To Think. I can’t say we’re great friends, but he’s someone I’ve respected from day one, a very driven and successful guy who wouldn’t be the worst person to emulate in many ways.

It’s a good book but not an easy book to read, and I put that in the review, along with other things. I highlighted some things about the book that were positive, and off I went. I even sent him the link to the review so he could see it.

Turns out he didn’t like the review one bit. He said it was packed with lots of negatives, and he proceeded to tell me how I should have written the review. He also said that he’d shown it to others who agreed with him and thus felt justified in sharing his thoughts with me.

I was… stunned. I’ve never had anyone hate a good review before. And this is someone who’s seen my writing style, being an early subscriber to my business newsletter. We’ve met in public and I’ve asked him to speak to groups of mine. Frankly, I guess I thought we had a better relationship than we did I suppose.

What did I do? I wrote him back, trying to express that it was written with a positive bent in mind but that I felt it was truthful. I said that I’d never intentionally hurt him and that he should know that as I’ve promoted him to multiple people over the years. I also said that the post would stand. His response back didn’t quite like that; so be it.

I also asked a couple other people to read the review, just to see if they felt like him & his friends, and they said the review looked positive to them as well as truthful. It’s all about perspective sometimes.

Writing is an interesting venture. You find that there are people who like what you do and people who don’t. It’s pretty universal when you think about it; as much as I love the Harry Potter books there are lots of people who hate them and the way they’re written. For that matter there are lots of people who hate Harry Potter that have never picked up a book or seen a movie; that’s pretty hypocritical but what can you do. Sometimes it feels like the lyrics from a Fred Knoblock song (I bet that takes some people back lol).

Although we write our blogs and articles to share our thoughts with others on a myriad of topics, when all is said and done the first person you have to please is yourself. Did you say what you meant to say, and did you say it the best way you could?

Sure, sometimes people misunderstand what you said or what your position is on something, but the beauty of it all is that you get to clarify yourself if someone doesn’t agree or understand. Hopefully even with topics that people disagree on they’ll stay civil; doesn’t always happen that way, as you know.

Pleasing yourself first means more than one thing sometimes. When I initially started writing back in 2003, I was writing a newsletter mainly because I felt I had a lot to share, and I thought others might enjoy reading it as well. At some point I felt I was writing because of duty, and I wasn’t sure that anyone really liked what I had to say, including me.

Truth be told, the only way you ever know if someone else likes what you’ve written is if they comment on it. Traffic means nothing because you never know if people actually read it or showed up accidentally through a search and bolted after the first couple of lines. If you’re writing to please others, get that thought out of your mind.

Feel the pull of writing, embrace it, smile at it, then do it. If it’s a chore, or there’s no enjoyment in it anymore, give it up, slow it down, or change things up. If you don’t like it, no one else will either.

Take a breath, smile, laugh and enjoy life. And if whatever it is you do, whether it’s writing or working or playing poker, please yourself. 🙂