Most of you know I’ve been doing these workshops and seminars on social media marketing. You might even know I’m now doing another seminar on October 2nd locally; I’ll be creating my “sticky post” about it soon. I’ve had many people come to me and say “I could never stand in front of others and give a presentation.” 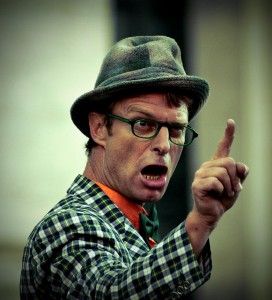 I can honestly say that I can see why it would freak people out. One of the issues with blogging is that we all put our thoughts and beliefs out here for the masses, and at some point someone could come along, say something bad about it, and pretty much ruin your day. If that happens in person, it could feel like it’s even worse than blogging.

The fear of public speaking, also known as , alternates almost yearly as the biggest fear of most people, only supplanted by death. It’s hard for someone like me to believe that people can actually have that much fear of speaking to others, but I guess it could be because there are way more opportunities to speak than there are to die, morbid as that sounds.

I have never had an issue with public speaking. Even as a kid, I could get in front of a room of other kids and do my thing. I’m not really sure how, since I have my periods of being an introvert, and other periods where I’d just rather be hidden and not have to worry about people looking at me. However, I guess those periods where I have to do what I have to do come out, and after all, how could one want to be a public speaker if one couldn’t figure out how to speak in front of others?

So, what are the basics of the art of public speaking? Here are my 5 basics, some of which I’m assuming you’ll have seen elsewhere, and some of which I hope I’m the first one who’s saying it, but I doubt I am.

1. You need to like what you’re talking about. How come you can tell jokes to a group of your friends at a party? Why is it that every kid in the world can learn song lyrics to music they like yet can’t pass a history test? Because you liked the joke when you heard it, or kids liked the song they were listening to. It’s why many guys can quote some of the most obscure sports stats sometimes. If you like what you’re talking about then it’s an easier thing to deal with.

2. You need to know what you’re talking about. If I asked someone random to talk about RAC audits (don’t ask) they’d be way out of their league. They’d probably sweat and get really nervous and try to do some research, if they even agreed to talk on it at all, but they’d never get comfortable with the topic if they weren’t in the health care industry. If you know your topic, it becomes easier to talk about it.

3. You need to rehearse what you’re talking about. When I’m going to be giving a presentation, I go into the living room and I rehearse. I go there because my wife has four mirrors on one wall, and that gives me the opportunity to practice looking around the room so that when I’m doing it live I’ll remember to do that same thing. Even when I’ve done the couple of webinars and podcasts that I’ve been asked to do, I’ve rehearsed as if I was giving a live presentation in front of others. Even Zig Ziglar, who’s been giving presentations for more than 40 years, says that he rehearses before each speaking engagement, even if he’s speaking on a topic he’s addressed in the past.

4. You’re allowed to have notes or outlines or anything else you need to help you stay on point. Most of the time when I’m giving long presentations, I will have a powerpoint presentation along with me. When I rehearse I always have an outline to work with to make sure I stay on point. When I’m putting on a relatively short presentation, as I did with my Keys To Leadership seminars, I did them without notes, but because I had rehearsed I know what I was going to talk on and only had to memorize the topics. People who come to watch you give a presentation aren’t looking for perfection all the time; they’ve either come for the knowledge or because they like you as a speaker.

5. Remember that the majority of people who are there to see you are not only there to hear what you have to say, but they’re sitting there amazed at how brave you are because they can’t see themselves standing in front of anyone doing what you’re doing. That’s actually the first thing to try to recognize once you’re close to giving a presentation. The difference between a good and bad presentation often comes down to confidence. If a speaker can project an air of confidence, people will be on their side. No one wants to see any speaker fail, especially if one is interested in the topic. Of course, don’t be so overconfident that you forget why people are there in the first place either.

20 thoughts on “The Art Of Public Speaking”