The world of sales and networking is changing, and a major part of it is happening via social media. I could say ‘internet’, but truth be told, the internet on its own really didn’t change much except to allow people the opportunity to have a presence online.

Blogging is part of social media, and it was one of the first mediums where creators learned that they could connect with a lot of people and make money at the same time. There are quite a few bloggers who became millionaires before the rest of us got into it.
END_OF_DOCUMENT_TOKEN_TO_BE_REPLACED

I once wrote a post where I talked about why business people need to be on LinkedIn. It wasn’t a bad article, but I didn’t go into any kind of detail as to why people should be there. 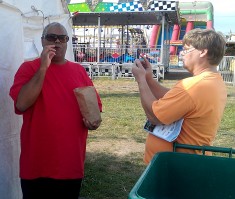 Most of the people on LinkedIn are either looking for jobs or parking their name there “just in case”. While that’s all and good, if you’re an entrepreneur, business owner, or salesperson, you also need to establish a viable presence. Even though LinkedIn’s becoming the business version of Facebook, you still need to be there. I’m going to give you 3 quick things you should do when you get there.
END_OF_DOCUMENT_TOKEN_TO_BE_REPLACED

LinkedIn is a social media platform specifically for businesses. It offers a way to connect with people who not only could be potential customers and consumers, but people who were in the same industry. Yet, almost every day I see things happening that are irritating to the point that you just want to slap somebody. Okay, that might be a bit over the top, but they make you mad. And some of those people trying to reach out to you which makes it even worse. All of you know the saying “you only get one chance to make a first impression”. Well, there is a of bad first impression. I’m going to name four of them, and hope that none of them are you.

Don’t be a lazy first connector; if you’re looking to meet someone at least right something different, even though you don’t get a lot of space to do it. You’ll be more memorable and people will be more likely to connect with you there.

2. No picture and no flushing out what you do. People trust what they can see and what they can read better than seeing almost nothing. There are some people who join the site and immediately start sending out invitations for people to connect with them without giving people a reason why they should even think about connecting.

Unless I know who you are, if I’ll see a picture I’m not connecting with you. If I go check out your page and all I see are three or four separate lines of things you’ve done in the past without saying anything about it, I’m not connecting. I know some people who will connect with anybody who reaches out to them, but the quality of your connections has to count as much as how many connections you have.

3. Don’t immediately start selling after someone connects with you. I’ll admit that I’m one of those people who look at the profiles of people who want to connect with me. I have found over the years, and I’ve been a member of LinkedIn for nine years, that people whose profiles have nothing to do with anything that I’ve listed on my profile only want to sell me on something or try to get me to help them do business.

Unless they’re local, or I see a number of people that I actually know who are connected with that person, I’m not connecting with that person because I know what’s coming. Trust me, a short introduction saying hello and telling the person you’d like to know more about them goes a lot further in networking that that person then immediately trying to sell them on something.

4. If you join a group with an intention to actually participate, don’t start off introducing who you are and telling people what it is you do. It’s always best to stay on topic, and if people are intrigued by what you have to say it will follow you back to your profile to learn more about you. And if you’ve taken the time to flesh out your profile (see #2) you’ll intrigue people and on their terms.

I’ve written before that every business should be on LinkedIn, but just being there isn’t enough to give you the opportunity for proper business networking. Work on some of the things I mentioned above and you’ll be well on your way.

LinkedIn is supposed to be used for business purposes. The very idea of LinkedIn is to be able to network with other business owners or people in certain industries to discuss business, or to network. Therefore, the way I see it, LinkedIn is a very viable place to try to make connections within your industries.

I have around 450 connections there. I know maybe 100 of them well enough so that I wouldn’t have to reach out to them again, which left me with about 350 contacts that I could look at and try to determine if there was some way I could work with them. I set about the task by starting at the beginning of the alphabet and looking at each name and what it is they did. I knew I wasn’t going to contact everyone the first time around; some, based on what they do, I won’t contact at all.

In this case I didn’t create a list ahead of time. I figured that since I was on the site at the present time, and since you can’t send a group message to just anyone you’re connected to (actually you can but your message should be tailored to each individual so it doesn’t look like spam; LinkedIn hates that), I’d just go ahead and send my message. I created a couple of different scripted messages, but then I never used them. No matter, since the process of scripting helped me decide what I wanted to say anyway.

This was a 2-day process of going through all the names. In the end, I sent messages to close to 35 people, and I deleted around 30 people I was connected to. To date I’ve only heard from one person, someone I actually know who I hadn’t talked to in years and yet is in my field, so that doesn’t really count. The others…not a word. And if I don’t hear from any of those people within 2 weeks I’m going to my sent folder so I can identify them and I’m removing them from my list. I figure that if it takes that kind of effort to respond to a message on a business networking site then they’re either not really interested in that kind of thing, haven’t been to LinkedIn in awhile and thus don’t know what to do with the message, or really aren’t interested and don’t want to bother with me. In any of those cases, why stay connected? Agree or disagree?

And yes, this is marketing, online marketing but in a way more like email marketing. I made each message more of an introduction than a sales pitch because truthfully I figured I really didn’t know these people, no matter what it says on their LinkedIn page. After my first year on the site most people have connected to me first, so I figure it’s well within my right to try to connect with them now, since I added them when it was requested. But culling my list will take place, and I figure that when I go through the next round that I could be closer to 300 connections total. From where I sit, that’s not bad if I know those people.

And so it goes; thoughts?

I’ve been a LinkedIn member for a long time now. As a matter of fact, I got an email last week from LinkedIn announcing their just passing 100 million members, and thanking me for being one of not only the first 1 million members, but actually placing being one of the first 685,000 members; not so bad, right? At first I wasn’t sure what to think of LinkedIn, but as time went along, I started to realize that as a business vehicle it’s fairly essential to be listed on the site and participating in some fashion. I’ve met a few people locally through there as well; that never stinks.

Having said that, as the site has grown I have to say that there are a number of people who don’t get it. I mean, it’s not all that hard to use, yet I see some things that just make me absolutely cringe. Since I figure it’s what I do, I’m going to offer 5 effective ways to use LinkedIn.

1. If you’re inviting someone to accept you as a connection, please write something special other than the standard message given to you by LinkedIn. This is a pet peeve of mine, and it seems to be a pet peeve of man local Syracuse folks based on what I’m reading on Twitter. It takes no time at all to write something a bit more personal, especially when you don’t know the person you’re asking to join, and then if it’s someone you know it’s even more special.

2. If you’re inviting someone to be a connection, don’t list them as someone who has worked with your business or at your business if they never did. This one is common for me, and its irksome. That’s because LinkedIn then believes you actually worked for that company and it starts sending you messages any time someone else from that company signs onto their service. And there’s nothing you can do about it; trust me on this one.

3. Join a group and write something. This was one of the changes LinkedIn made back in 2008 and it was a good one. Their groups are either business related or education related, and they give you a chance to show that you have some knowledge in your field. This is one place where lurking won’t do you any good because no one will know you’re there; why waste your time like that?

4. Every once in awhile, pop in a business update of some kind. I try to get there at least once a week to write something short and sweet that’s happened in my business, though sometimes it’s a couple of weeks. You do this because when LinkedIn sends out its weekly email, your name and what you’ve done might pop up in someone’s inbox, or they may be compelled to follow the link in the email to see what other people they’re connected to have done during the week. People like working with successful people.

5. If you ask for recommendations, only do it for people you know well and who know your work. I get requests all the time from people I barely know or may have met but never worked with. I ignore every single one of them, which of course means I delete them from my inbox, and I never respond to those people at all. Every once in awhile, if I’ve never met them in person, I’ll drop them from my contacts list. That kind of thing is unethical in my opinion, and if you’re unethical and I don’t really know you, how might you treat me when we do get to know each other?