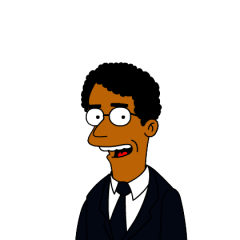 fake me as an example

Last month I wrote an article talking about 9 ways to recognize spam. One of my points was that most spammers don’t have avatars/gravatars. Someone asked me about it and indicated he didn’t know how to get one. So, I decided to not only tell people how to do it, but republish some of the reasons why an avatar should be used if you’re going to comment on other blogs.
END_OF_DOCUMENT_TOKEN_TO_BE_REPLACED

Last week I was in Las Vegas at a health care finance conference. I had a pretty good time, first time in many years I have to say. I also noticed something pretty wild that helps me with the premise of what I have to say today.

If you’re on either Twitter or Facebook, you’re going to see a lot of images of some very good looking people. The overwhelming majority are pretty women, but sometimes it’s a good looking guy (I suppose; I don’t notice the guys that often). They’re extremely good looking, to the point of perfection sometimes. They just look too good to be true.

Before my trip to Vegas I’d have said you just don’t see that many outstanding looking women in one place anywhere. That’s been pretty much true for my life. Not that I haven’t seen a lot of nice looking women, but rarely in one place, and certainly not in quantity.

That is, until I was at the Wynn. For 3 1/2 days I kept seeing some of the most outstanding women I’d ever seen in person. And most of them were wearing little black dresses, shorter than the ones in the image above. There’s a different walk from women wearing stuff like that. It’s confident and quick, with short strides, and you never see any of them slouching over. Then again, with 3 to 5 inch heels, I’m not sure if one can even slouch.

You know something else about the experience? You weren’t going to meet them. They weren’t there to talk to me or most of the people I saw. That is, unless you were one of three things.

One, you got into one of the big, expensive dance clubs that seemed to be open most of the day, definitely into the night (4AM, which for me was 7 AM; I didn’t sleep well). I was informed that many of the ladies are actually hired to go into the clubs to talk to some of the men that show up along; of all things!

Two, you were already part of their inner circle, because many of them already had their arms around or hooked up with some other young man, every once in awhile an older man. I have no idea whether the relationships were legit or not, just that they weren’t alone.

Or three, you happened to bump into them, which happened accidentally a couple of times because, well, I’ve noticed pretty people seem to think it’s everyone else’s job to get out of their way, and for the most part I do, but when I get irked after awhile I’ll just stop and let people walk into me, and since I wasn’t moving they pretty much have to apologize since I certainly didn’t walk into them. I’m pretty nice, but I have my limits as well.

I relate this to what I see online. For the most part we don’t know any of the women in the avatars. On Twitter, most of them are fake; that is, the women aren’t fake but the picture isn’t of the person whose Twitter account it is. Kind of like on blogs where you get the picture of a very pretty woman yet the writer’s name is John. Heck, every once in awhile the person isn’t even trying and has the image of a famous actress saying it’s them; please!

It’s things like this that make us not trust people, something I’ve talked about lately as you know. It reminds me of online dating, where I hear that people will put up pictures that are supposed to represent them, but it’s either a picture of someone else or a picture of them when they were 18 and they’re now 45. I remember knowing someone who put up a picture of himself on Facebook some years back from when he was in his 20’s and I called him out on it because he was closer to 60. Of course, that was before the days when people started randomizing their images and thus sometimes would put up pictures of themselves at a much younger age.

I’ve been to some blogs lately where the owner has said that if someone leaves a comment and doesn’t have an avatar, they’re going to remove the comment, no matter how good it is. I’ve decided that criteria doesn’t work for me because I know some people are faking their avatars, some are using logos, and some folks use cartoon images to represent them. So, personally I don’t care about the avatars as much, especially since I have it set so that nothing worse than PG will show up here.

My main point overall is that if you get to thinking that maybe someone is worth following only because you see their image, without trying to check anything else about them, you’re going to be disappointed. The marketers or whatever you want to call them are hoping to trick you, to get you to follow them so they can market to you or have you in their clutches. Don’t get caught up in the game; you’ll hate yourself for it later on. Instead, hope to meet someone as attractive in person as I did while I was there. Yeah, I’m married and I wasn’t chasing, but it never hurts anyone’s feelings to have a picture with a nice looking person. Just don’t believe the hype. 🙂