The most popular post I ever had on this blog concerned a trip my long time internet friend Rasheed Hooda made when he decided to visit 40 states in two months to try to meet as many people in person that he’d first met online. I was one of those people, and his full story connected with a lot of people. Go check that one out if you want to big dose of inspiration. 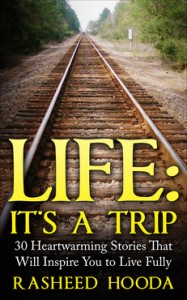 Rasheed, who still holds out hope that he’s going to climb Mount Everest some day (I think it’ll happen when China allows the Dalai Lama to go back to Tibet but that’s just me lol), has now written what I’m calling a bit of fun and wisdom in his autobiographical book titled Life: It’s A Trip, and he shared it with me so I could read it and talk about it here. So you know, that link takes you to his website, as it’s in an ebook format and he’s selling it off his site… thus, that’s not an affiliate link you see. 🙂

This isn’t a big book, which means it’s not the traditional autobiography one might expect. Instead, it’s a motivational manifesto highlighting different things in his life that have made him what he is. From stories of his many different types of jobs, travels and travails, the people he’s met and the lessons he’s learned, you not only smile as you read it but sometimes you literally feel inspired to do things… just maybe not all the things he did. lol

For instance, he talks about his initial attempts to climb something known as Guadalupe Peak, the highest point in Texas at 8,751 feet (wouldn’t be me even trying) and having to learn the first time that one needs proper foot gear when climbing mountains. He tried a few times and finally make it quite recently, but the telling of the original story, which included figuring out how to get there, was a lot of fun to read.

For me, one of the more important topics of the book was the part he titled “Control your own Financial Destiny”, which he where he talks about learning the craft that I alluded to in the previous post linked to above and how, if nothing else, he’ll always have a way to make the money he needs, thus being totally in control of his money. There are a few other lessons he talks about as well, probably things most of us might not have thought about that show us if we have a dream or goal there’s almost always a way to get there.

One more thing he talks about tugs at the heart strings. How many of us know someone who was killed and eventually had the killer get the death penalty? If that’s happened, did you have a story that inadvertently tied you to part of the event? That’s as far as I’m going with this part, but it’s touching and will give you a little bit of a shiver when reading it.

If you want a book that’s a pretty easy read, inspiring, heart breaking at times but always with positivity and motivation as its path, you’ll enjoy checking out Rasheed’s book. And he’s even giving you a money back guarantee; how cool is that (because I’m not doing it for my book lol)! There’s even a couple of free samples to look at.

Go check it out and give Rasheed a bit of love; then make sure to tell him I sent you. 🙂

7 thoughts on “Life: It’s A Trip by Rasheed Hooda”