By now most everyone is familiar with the quote “Build it and they will come” from the movie Field of Dreams (which I’ve never seen; I’ll have to rectify that one of these days). Of course, most of us that blog know that’s not quite true. We spend our time writing posts and putting them out there for the masses, and unless we get into the blogosphere and find readers our dreams of blogging success just aren’t going to come true. So, the phrase is false. 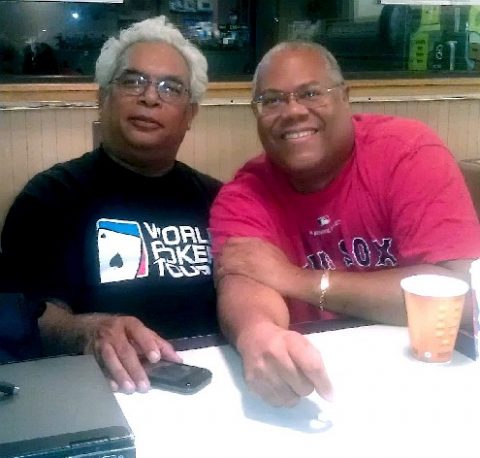 Or is it? Not according to someone I just met in person a couple of weeks ago, but who I’ve known for at least 8 years online. He’s the guy in the picture to the right along with myself; I’m the guy on the right in the picture, just to clarify things.

His name is Rasheed Hooda, and he’s on an interesting quest. He’s taking a 2-month trek across the country with the intention of visiting people in 40 states that he’s met over the years online. He might be visiting some people he already knows as well; I didn’t clarify that one with him. He started out from Houston, went west, north, then east and eventually will head south down to Florida before getting back to Texas.

Of course we had to talk about this venture, and I asked him why and how he was doing it. He said that his dream was to be able to travel around the country once he got to a certain age to meet people and to see the sights. His reality was that he wasn’t rich and thus had to figure out a way to fund his travels.

However, he said that in his opinion it was more important to have the dream, visualize the dream, and see the dream as a reality by setting a date for when it would begin. In his mind, the dream would create the way he could get it done.

Then he found his way. One of the talents he has it that he can make balloon animals. What he realized is that children love them, people will pay someone to make them for their kids, and all he had to do was find places that would allow him to do it everywhere he went. His belief was that he could fund his entire trip by working only on weekends, when he could also catch up on his rest by staying in one place.

And it’s worked. He finds restaurants or malls that allow him to set up a place for a number of hours and he does his thing. And he’s making pretty good money from it; seems weekend work really can be lucrative if you can find something you love to do that other people love to partake of, and who hasn’t seen a child being amazed at watching balloons become animals?

So the dream worked; all is good, and that’s all it took. No, not quite. Leading up to the date he started preparing for the trip. He bought lots of large blue tubs for his supplies and clothes. He converted the back of his Kia Sedona into a sleeping space (that’s the beauty of being shorter than me, as I’d never fit lol). He bought what he needed so he could cook some meals if he didn’t want to eat fast food. And of course he stays connected via his laptop and smartphone.

He put all of this together over many months once he had the dream secure in his mind and he’d figured out how he was going to fund his trip. He did admit that he wasn’t sure if his trip would last even 2 weeks, since once we all leave the areas where we live we’re not sure how others will react to us but it’s worked out well for him.

This means you not only dream, but you start working towards your dream. This is a great lesson for all of us. Then he asked me about my dream and I said… I don’t have one. Wow, when did that happen? So, I’ve started thinking about a dream for myself, something to concentrate on, and if I come up with it you know I’ll write about it here. It’s my belief that it’s going to have something to do with readers of this blog, other blogs, and social media. In its own way this is an interesting trek. Thanks Rasheed; you keep on trekking as well.