I tend to be a creature of habit. I don’t try a lot of new things because, well, life has been fairly good. I certainly don’t eat exotic things, and I don’t often go to things that I’m not accustomed to. 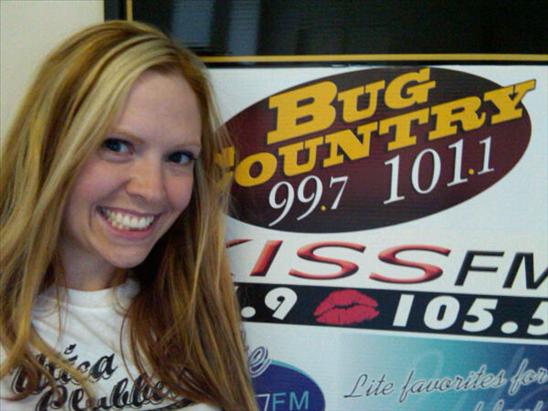 So, how is it that I found myself going to the roller derby? Because my friend Scott wanted to go after reading about it on Twitter through one of my friends there, Mel. I’d actually never met Mel, but sat behind her at a Christmas party last year while she was working this long gray dress; hotness all around. Anyway, she’s the public face of roller derby in the area, and she’s got the face for it. She believes in it so much that she actually got this tattoo on her side within the last few weeks; nope, wouldn’t be me, but she gave us a public viewing, which we get to show here. 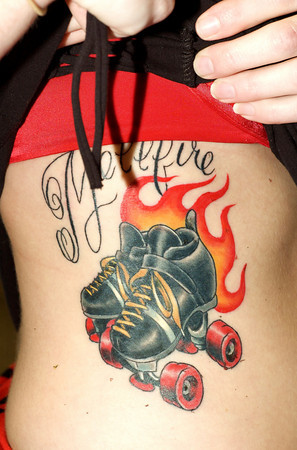 Of course, anyone over 45 remembers roller derby because it used to be on TV all the time. Some of us remember the movie Kansas City Bomber with Raquel Welch; stunning, I must say, and pretty believable. Back in the day, we thought roller derby was fake, and I guess one has to own up to the fact that there was always a bit of entertainment mixed in with what some claimed was a sport. Many of the participants were acting like bad people, which made you wonder just how real it was. 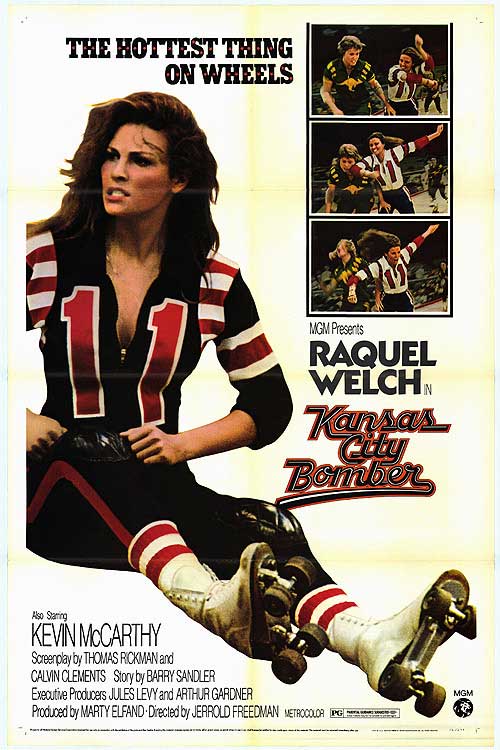 These days, it’s quite real, and very little like it was back then. For one, it’s more of a woman’s movement than a mixed gender thing like in the past. At the event I went to, there was a men’s game, but it was a pick up game of local guys who just wanted to try it out. Truthfully, they weren’t very good en masse, but there was one guy really good on one team, and it showed as his team beat the other team by almost 100 points. Once they were done it was time for the home team, the Utica Clubbers.

What’s the idea overall? I had Mel explain it to me, which worked wonders. By the way, I’m not as large as this picture might make you think I am; it’s all about perspectives (although, after seeing it, I did join a gym; that story will be later). 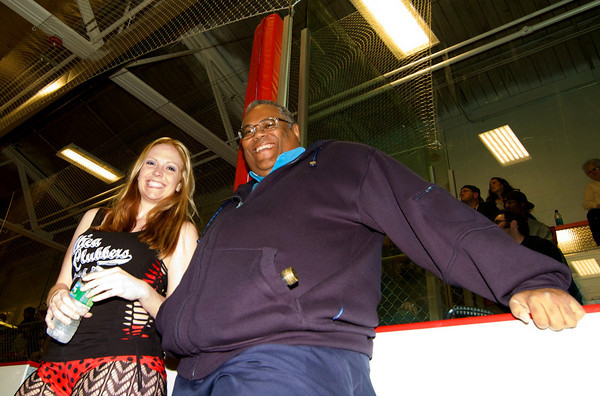 You have two teams, of course, and the bulk of the team is supposed to stop one person on the other team. They are known as blockers. Their purpose is to try to keep the individual person on the other team, the one who scores all the points, from passing them. That person is known as a jammer, and you can tell that person because she’s got a star on her helmet. Most of the time each team has two jammers so that one can replace the other for a breather. The final piece is known as the pivot; I learned about this position later on. This person is the one whose job it is to keep an eye on where the jammer is and to let everyone know the jammer is coming and where, so they can try to block the person. I’m not going to get into much more of how the game is played, but if you’re interested you can check out this roller derby game link. 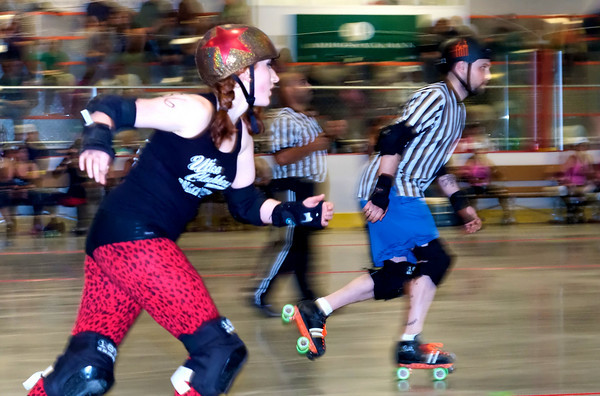 This was an interesting event for me. The crowd reminded me of the type that would show up at an independent wrestling circuit. The picture you see of the guys in big blue hats is indicative of a lot of what I saw, although most people just sat in the stands. There was a women dressed like a purple bee. There was one in a sequin top, tight short skirt with a tail. There was one I was intrigued with because she reminded me of a fantasy nurse with bright blonde hair that was indicative of what you might have seen in the 40’s, very stylish. There was a guy wearing a monkey around his neck. 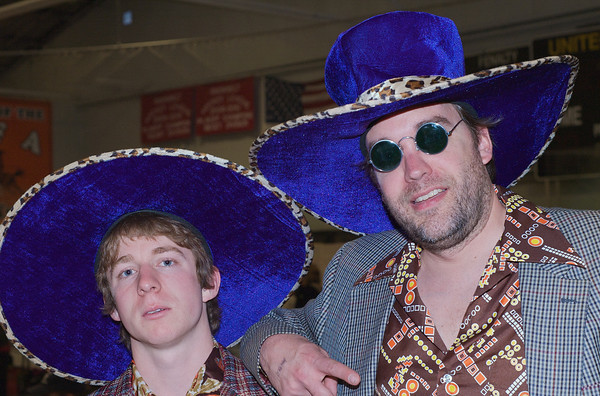 There were a lot of kids there. There were signs pulling for both the team and their favorite players. Even the referees had fans; that doesn’t happen in any other sport I know. The team in pink in these pictures actually came to Rome, NY, where the event was held, from New Hampshire; that was stunning to me. It’s not really a league, as they don’t keep statistics; it’s more of a universal club. This club has 6 teams in multiple states, and sometimes they go to other states to both play and watch others play. 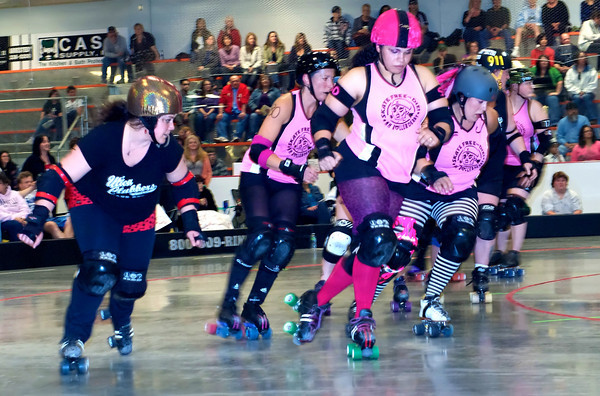 My friend Scott, who took all the pictures you see here, talked me into it by saying we’d go to the casino afterwards; I’m so easy to bribe. But I had a wonderful time, and met another Twitter friend I’d never met, Meghan, and one I did know, Frank; I’m giving their real names rather than their Twitter names, as that’ll be on them if they read this. I also met this guy who played in the men’s game named Jason, whom I saw a video of in the production Rocky Horror, as he played the main character and was very good in it. And after the initial band that was playing when we got in there, which was hurting both my ears and my feelings (angry rock/punk music; Mel said it was too loud also, as I was feeling like an old guy), this guy named Deaf Geoff, the DJ, was playing some music that was fantastic, and then I learned he’s actually legally deaf; think about that folks! 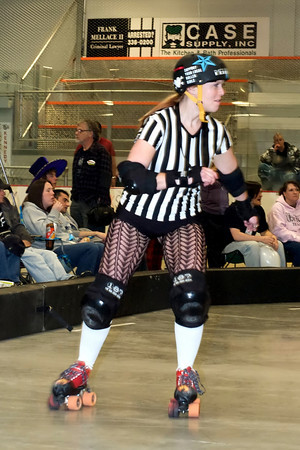 Of course Scott didn’t get all the shots I wanted, but I think there’s enough here overall to show some of what it was all about. Turns out Mel wasn’t skating that night in a match, but she was a referee for the guy’s game, which is why she’s in the outfit she’s in. We stayed for the first half, when the local team was ahead; they lost later, but I guess it’s not about winning or losing, just having fun and women showing that they’re not shrinking violets for anyone. 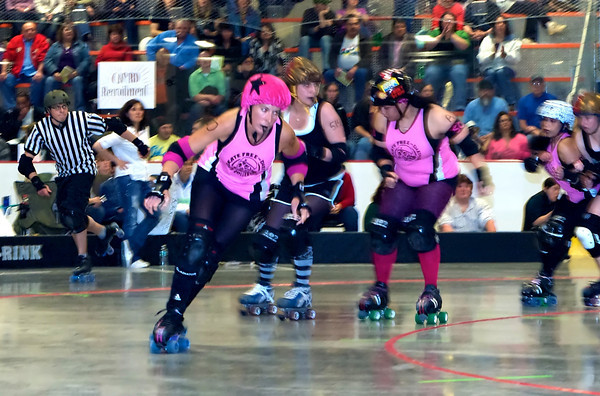 Hey, they had nachos, and I got to play poker later, though I was card dead so poker wasn’t as much fun as normal. Still, it all works for me; I may even go again some day. 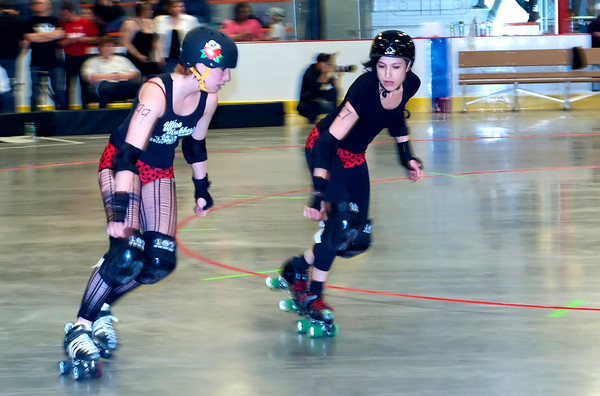