I’m slightly going off topic here because, well, I feel a need to urge people to do just what it is they need to do for themselves and their lives. Too many of us seem to be stressed and unhappy; let’s see what we can do about that. 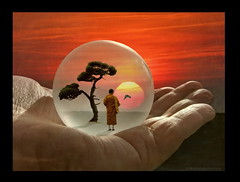 I had a friend call because she needed to vent. She’s had a tough go of it lately; actually, she’s been having a tough go of it since I met her years ago. I’ve never told her this directly, but almost every single piece of it is her fault. I sympathize with her only because she’s my friend, and for no other reason.
END_OF_DOCUMENT_TOKEN_TO_BE_REPLACED

Today is the 43rd year after the assassination on Dr. Martin Luther King. I’ve written about it in previous years on two blogs of mine, but I’m kind of going a much different route this year, a bit more controversial and kind of a departure for me. But it seems some things have to be said, some truths confronted, and heck, I’m in the mood to do it.

I have been privy lately to reading a lot of, and participating in quite a few, conversations related to minorities online. The major question has been why there aren’t any minorities recognized as A-list bloggers or gurus online if you will. Of course, that kind of generalized statement always gets challenged by the same people who, when people ask why there aren’t more black millionaires, say “look at all the athletes and entertainers”; please! In reality, 43 years after Dr. King, in the realm of being known by a lot of people minorities in general haven’t broken through online. Many people can name one or two, and that always reminds me of “Hey, I have a black friend.” And trust me, I’m not being sensitive; it happens across the board, even in technology.

The overall reality is that one shouldn’t expect that things will be different online than they are in the real world. For instance, there are only 3 black CEOs of Fortune 500 companies; at least in the past, as I haven’t seen the latest list yet. There aren’t any latinos or Asians at all as far as I can tell. Still, out of 500 there’s not even 10% minority representation; that’s a shame in this century.

Then again, it follows a pattern. The other day new unemployment stats came out saying unemployment went down to 8.8%; however, for black people it went up to 18%. For every other minority it also went up; what the heck is that all about? Well, I know, but I’m not saying right now.

Suffice it to say, there hasn’t been any “overcoming” so far. Yet, for all the laments on things that seem to be going against minorities, we don’t get a free pass on this. Bill Cosby was right; we’re doing a lot of this to ourselves overall. I’m not sure if you’ve heard that Latinos now number 50 million in the United States, which is pretty powerful. Yet, for all that power, they can’t get together to vote as a block and effect any change for their community. If they did, you wouldn’t have all this trash going on in Arizona. And if black people were acting right, you wouldn’t end up with incidences like this abhorrent mess in Cleveland, TX, where an 11 year old was raped and many of the people in town are blaming her; what the heck? And then it happened again in Riverside, CA.

Frankly, there’s a lot of blame to go around, and thus one can’t put all the weight on fixing any perceived or real issues on one group or another. However, I’m irked today, which is why I’m posting the video below, even though I’ve thought long and hard as to whether or not I should do it. In the end, I figure it had to be done, and it had to be said, and I’m just glad it’s not coming from my mouth. It’s from a Boondocks episode where Martin Luther King Jr actually came back to life and got a look at some of the “progress” his trials and tribulations had actually brought us to. I hope overall that this isn’t as good as it gets, but this little “speech” is as truthful as it gets… for now, as I acknowledge year #43: