Today is Independence Day In America… sort of… At least it’s the 4th of July, which denotes the signing of the Declaration of Independence in 1776 with the big John Hancock signature on it. To all those who will be celebrating the holiday… nicely or not… I wish you a very safe and happy day.

My uncle and me

Independence is an interesting thing to talk about today. Lately I’ve been seeing a lot of articles talking about a sort of independence as it pertains to social media. That topic is the “art” of unfriending, separating from someone on a social media platform who’s getting on your nerves in some fashion.

The odd thing is that more articles are talking about why they won’t unfollow people, people we shouldn’t unfollow, people we unfollow because of other circumstances and of course all the negative political talk unfriending.

Some writers are saying that our society is becoming more intolerant, not because of what people are saying but because some of us block people whose views we disagree with instead of engaging them in conversation and either trying to convince them to see your side of things or even possibly swing them your way… with facts of course.

I have a response to the people who are saying that: are you kidding me? Weren’t y’all around when I had to deal with stuff like this back in 2008 when Barack Obama was running for president? Aren’t I still going through a lot of this same mess now?

Back in January I talked about how I’d just finished sculpting my Facebook feed because a lot of people were getting on my last nerve. Some of these were people I’ve known for a long time, whose politics have shifted over the years away from mine. Some were relatives I don’t know all that well who were saying a lot of foul stuff I don’t participate in. Some were folks sharing stuff I could have cared less about. Some were people I really didn’t know all that well, and some were people who I’d never heard from in all the years I’ve been there.

Frankly, my feed hasn’t necessarily been as peaceful as I’d like it to have been but it’s been a lot better. Every once in a while things slip in because you can’t block images by topic, and you can’t account for everything that happens in the world.

There are also lots of people who are what I call Twitter selfish because all they do is promote themselves all day, lots of posts, without much regard for anyone else; ugh! Then you have the other side of the coin where people aren’t producing anything original so that we can help promote them. Maybe you’ll remember my post a couple of weeks ago saying that there are lots of people who aren’t even giving us the chance to help promote them on social media.

I don’t worry about either hiding people or unfriending them on social media because they do the same thing to me. Facebook tells me when people unfriend me (it’s not supposed to but I have a plugin…), but Twitter doesn’t. Neither does LinkedIn, where I also went on a culling spree some months ago. 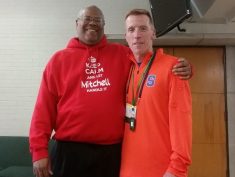 me & my college friend Pat

I will acknowledge that true discourse leaves when we don’t engage people whose views we don’t agree with. At the same time, I have to say that people on social media engage much differently than they do in person.

People tend to be nicer when expressing their views in person. Maybe it’s because I’m a 6′ tall large black man who they don’t want to potentially deal with if they make me angry; I don’t know. Maybe it’s because when all is said and done the best they have is “belief” rather than facts. Or maybe they’ve heard of my reputation, where I’ll just cut them out of my life and move on; depending on circumstance I’m not big on forgiveness (sorry Mom).

The reality is that blogging is more about opinion than anything else. Even when we’re doing tutorials, we’re giving our opinion on the right way to do things. It also turns out that some of these things don’t work across the board, as I found out after I wrote my brief Samsung tutorial; sigh…

Social media is pretty much the same thing. We can only know what we know so sometimes even if we’re posting fact, it could turn out that fact isn’t true sorry Walter. Depending on how it’s presented, it’s either something we can talk about or it isn’t.

Still, no one should feel obligated to do everything someone else tells them to do… even if I’m saying it (do it! lol). We all know our comfort level and should handle social media as we see fit.

Can there be consequences? Absolutely! Family members might get upset if you drop them. Coworkers might get offended if you drop them. Also, you might find that just because you drop someone doesn’t mean they might not still see things you’ve said (you have to learn how to drop people) or that you won’t still see things they post because you’re connected to some of the same people.

10 thoughts on “How Social Do We Have To Be On Social Media?”