Last week I listened to an interview on a blog by Ray Edwards with Carrie Wilkerson, whose new book called The Barefoot Executive has just come out. I bought it and I’m about 1/4th of the way through and it’s very good, so I’m recommending it to you as a great business purchase. 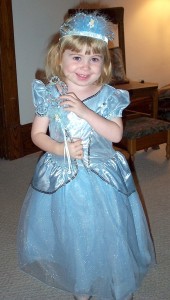 Anyway, I was drawn to one particular point where she talked about dreams and how people will have dreams of things they want to achieve, yet sometimes it scares them to think about getting there and then, if it comes, what to do about it or where to go from there. She used two great examples from two of my favorite movies (y’all know I’m just a big kid, right?), Tangled and Snow White and the Seven Dwarfs.

From the first movie, the main character is about to experience something she’s dreamed about from the time she was a child, and she’s somewhat sad. When asked why she’s sad she answers “What if it’s not everything I dreamed it would be?” His response is “It will be.” Then she asks “And what if it is; what do I do then?” His response is “Well that’s the good part. You get to go find a new dream“. From the second movie we remember that Snow White is singing a song about wanting her Prince Charming to come, and when he actually shows up she runs into the house and closes the door.

I tend to be a dreamer, but I’m also a realist. I know that if any of my major dreams ever do come true that my life would change. I believe that many people who end up being rich and famous, or even just rich, haven’t prepared themselves for what’s potentially coming. That’s why do many people who win the lottery end up broke, and so many people who end up famous go to rehab, or at least get counseling. All of them know the hard work it took to get there they got, but once there, how many of them have built a foundation to help them keep some of that money and prestige? I mean, how many professional athletes have to end up losing all their money for whatever reason before someone sits back, thinks about it, and realizes that just getting there isn’t enough?

I think it’s this fear that has so many people leaving comments on this blog whenever I talk about striving for the top saying they’d rather make enough to be comfortable, whatever that means. There has to be a fear of getting rich, of being famous, of suddenly seeing your friends change their behavior towards you or you changing your behavior and your friends, of spending money on things you’d have never bought before just because you can, and the fear of what happens if you lose it all and have to start all over again, yet can’t capture what you had.

Two quick stories, if I may.

First story, I used to play piano and sing at weddings. Back in 1999 I performed my last wedding. I got to sing a song that I’d always hoped I would sing at my wedding, a song I wrote. It was the final song I ever sang in public, in a church, and I got my one and only standing ovation. I decided that day I was done, that it wouldn’t get any better than that, and I’ve almost never played the piano or sang again, even in the shower. It was a dream I had, though not quite how I saw it coming, but I accepted it and moved on.

Second story is one about weight. I’ve always had a weight issue, I hate to admit. When I first went to college I was probably in the best physical shape of my life but still slightly big. I wouldn’t eat my first semester in college because I couldn’t get used to the food, and I lost 26 pounds. I kept that weight off 2 years and though I’d always keep it off. Gained it all back and more my third year and didn’t lose it again until 10 years later.

Then I lost 66 pounds and was down to what I considered a great weight. Thing is I never believed I could hold that weight, as I thought I’d lost way too much, and two years later I’d gained that weight back and then some.

One more time I lost 50+ pounds and finally I was at the weight I thought would be perfect. This time I held onto it for 9 months, then things started heading south again. See, with my weight, I’ve always dreamed of a size I wanted to be, but I’ve never been able to prepare myself mentally to stay there, and thus I’m back on the losing weight thing again.

Think about this and let’s see what you have to say; what if your dreams came true? Would you be prepared? Would you be ready for another dream, or would you say “it can’t get any better than this?” Or are you fearful that you’d hit your dream and that you couldn’t sustain it and thus would rather not even dream, not for fear that you couldn’t get there but for fear that you might get there?

If you’ve never seen Tangled, enjoy this little clip from the movie, apropos to this topic called I’ve Got A Dream:

33 thoughts on “What If Your Dreams Came True?”