When I wrote my post in March talking about 31 mistakes people make in blogging and social media, one of my points about blogging was that a lot of people still aren’t using images on their posts. I don’t fully understand the science of it all, but for some reason not only will more people read your posts but they’re more inclined to share them on other social media sites.

It’s something I wish I’d started earlier than 2011, but them’s the breaks. I mentioned that in another post I did in July, along with saying that I should have been using my own images more often. One of the comments that post received was that images should fit the content for maximum effect.

I responded that the statement was true, but that there were so many topics, like blogging, where finding images that fit becomes a tasking proposition. After all, how many pictures of someone sitting at a computer, or someone with their hand poised to write something, or even hands on a keyboard are out there, let alone all that compelling? He agreed with me that it’s probably better to have an image than not having one at all.

Let’s talk about this concept of niche imaging. Truth be told, if you’re talking about fishing and you have pictures of people fishing or even of fish that’s probably a strong relationship for your visitors. Talking about baking and having a picture of a cake is probably going to grab my attention.

Yet, for all the talk about finding images that match up with the content, have you paid much attention to the large content curation sites and news sites? Have you noticed that quite often what they’re sharing is either an image that they think their visitors will find attractive or compelling, or a stock image that they pull up every time they have a related story, and that quite often the image has nothing to do with the content at all? The items most visited and shared online contain either babies, puppies or kittens or pretty women (which makes my buddy Peter happy lol).

Back in 2010 my friend Scott wrote a guest post here about copyright and images, and a lot of people (myself included) have at one time or another received something from one of those photo copyright sites saying we’ve used something we didn’t know was copywritten, even if it came from a site like Flickr (which has tightened up its rules since then). When you have the whole world of images in your pocket it makes things easier when you’re looking for something you think might fit your content well. When you realize you don’t, that crate of images becomes the size of a book of wooden matches.

That is… unless you feel confident enough to use some of your own images, even if they don’t always fit the content. Truthfully, for mobile speed purposes, using your own images gives you the ability to shrink the size of your images, something the search engines might hold against you. Whenever I use images via the Compfight plugin, even though I love the images I use, there’s nothing I can do to compress them since they’re coming from elsewhere. 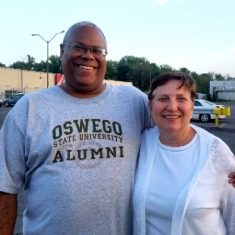 Check out the image above? That’s not such a bad picture is it? Doesn’t it draw the eyes, no matter what the topic or niche might be? What about the image here, which features myself and one of my best friends from college? For people who know me they get to see another side of me, and for people who don’t they’ll probably figure out it’s a picture of the writer (even if they might guess wrong lol) and someone else if they miss the pictures of me above. Even if neither picture was all that compelling (you’d better think they’re compelling lol), isn’t it better having them here than having nothing but words in the post?

I’m not sure if you’re like me or not, but I have nearly 5,000 of my own images on my computer, and even more in photo books all over the house and at Mom’s house. They may not all be spectacular shots, but they meant something to me or my family at the time they were taken, and some of them can certainly be considered vintage. Many of them are even funny; who doesn’t like funny?

From my perspective, using your own images is a nice place to start. Using images from other sources that can match up with your niche topic are even better when you’re discussing specific business issues or points. As you’ve seen in posts of mine like when I talked about blocking newsletter popups I took a screen print of the setting page of the browser add-on I use to show people how to set it up, which in essence became one of my images instead of something I found online. That type of thing is always helpful also.

Or just go with the babies, puppies or kittens or pretty women; at least you know your articles will be seen, even if your visitors don’t stay long afterwards. 🙂

6 thoughts on “Using Your Own Images And Niche Imaging”