A week and a half ago I wrote a post talking about the need I felt to go to the Blogging While Brown conference in Washington DC after a week of reading & hearing about too many racial issues in the news. My initial plan was to write my follow up post about the conference and post it this past Monday. 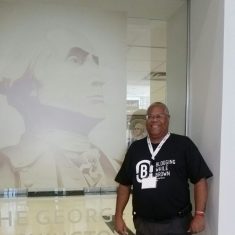 Two things got in the way of that. The first is that I realized that I had missed writing about my 1,700th post by one, so I had to get that in there. The second is that I didn’t get home until after 1AM because my flight got delayed a couple of times, then I couldn’t find my car at the airport (hey, I was tired! lol), so I wouldn’t have been in any condition to write the article once I got home. Luckily I wrote the other article before I left & scheduled it for this past Monday, while saying I would write a second post this week talking about the conference… this is it. 🙂

Those of you who read these posts (I think 10 of you lol) know that I don’t necessarily write traditional posts like everyone else. Thus, what I write might not conform to your expectations. They’re going to be my honest thoughts, so if you went to the conference be prepared for that. However, I didn’t have a bad time there so there won’t be any negative shockers that will upset anyone… at least I don’t think so.

Further down I’ll be embedding the video I did of my entire weekend in DC to add a bit of flavor to the presentation, but for now, let’s get into my observations, takeaways and commentary.

1. The location wasn’t what I was expecting

This isn’t good or bad… just different. It was held at the Marvin Center… which turned out to be at George Washington University… which happened to be a college that’s actually a bunch of buildings on city streets with restaurants and shops around it that would be easy to miss if you didn’t know it was there.

That part is shocking because supposedly they have an undergraduate class of 26,000 students. However, those numbers are different than any other university I’ve known. For instance, out of that number only around 11,000 are undergraduate students, which means the majority of the students are graduate students; that’s just phenomenal! Second, there are more female undergraduates than males; that would have been a nice ratio when I went to college. lol Third, the college is just under 57% white, which means the college if fairly diverse, ranking at #477 in the nation.

Most of the presentations at the conference were in the theater, which was intriguing. There were breakout sessions in a room on the 3rd floor and in the cafeteria area. As for the food… well, at least they had food. 🙂

2. The people were what I was expecting

It’s rare that I’ve had the opportunity to be around so many black people like this. Not counting family or weddings, the last time I was around this many black people was 1995, when I left my job at Syracuse Community Health Center to go work up north in Wayne County (that’s in New York for those of you who don’t know where I live).

This was a pleasure because I had a feeling I knew what I was walking into and I couldn’t have been more pleasantly surprised. Everyone in that room gave off a feeling of accomplishment, whether they were young or older (I was one of the oldest people in the room; gasp!). If y’all had any stereotypes of what a gathering of black people might look like this would have blown your mind.

It was nice being in a room full of professionals in many industries. Some were solopreneurs (that’s a word now lol); some worked traditional jobs. Everyone was extremely nice. I only ended up getting a picture with one of the presenters, but could have had way more. I felt really comfortable with this group, which doesn’t happen often these days; that was nice. 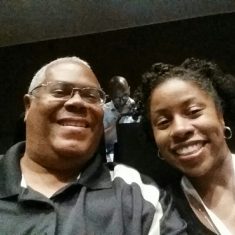 That’s not totally true. I knew my buddy Yasmin Shiraz was going to be there and it was great being able to finally meet her in person.

However, no one else had any idea who I was or what I did and that was kind of a shocker. As I said in the video, it’s the first time I’ve ever gone to a conference where no one knew who I was. I thought that with all the things I’ve done and people I’ve met over all these years online that I might meet at least one of the folks I’ve talked to. Nope; didn’t happen.

Thus, for the most part I tried to stay quiet and just take things in. I almost did it for the entire conference but I asked one question and that turned into something else that I wasn’t expecting. Folk were trying to give me advice that would have been helpful if I didn’t already know what they were advocating. Yet, because of all the attempts they made I’m doing an experiment on Facebook the next couple of days that I’ll get to write about at another time, so that worked out fairly well.

Okay, time to get real. During the opening session on the first day of the conference the moderator asked the audience how many people didn’t have a blog… and half the people in the room raised their hands. I was shocked by that because I had assumed that the overwhelming majority of people were bloggers. Turns out that was the first shock.

There were no real conversations about writing, content, how often, etc. True, there were a couple of people who talked about scheduling blog posts along with scheduling how to promote oneself using tools, and there was the conversation about trying to find one’s voice when blogging. A guy named Linal Harris talked about storytelling and how it can make your blog compelling; I liked that a lot.

So, if no one talked about blogging all that much, what did they really talk about?

5. It’s all about the hustle, recognition and sponsorships 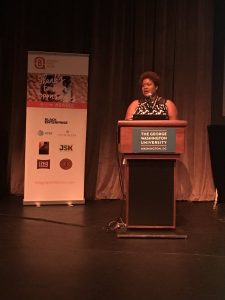 If you want to feel old, just listen to younger people who are bloggers but not the type of blogger you are (or at least I am) talking about how they’ve figured out how to engage their audience so that they can generate money from their readers. Some have been highly successful at it, even if they were what I’d call non-traditional.

For instance, one young lady named Cari Rene and her sister have carved out a style empire by making one unique choice. They model all their own pictures but they only wear either white or black clothes for the most part. The images are high quality and compelling, and they’re masters of photo editing. By switching to that style they’ve been able to make a career of being image consultants as well as models. As for the content, you can look at 2016 and see they’ve only posted 5 articles, and in the previous two years just 72 articles. As I said, to people like me it’s a non-traditional way of blogging, yet they figured out how to use the blog to create a career; that’s so smart!

At one point Yasmin said to me “We’re doing things all wrong.” It certainly felt like it, that’s for sure. And yet…

6. Almost no one who presented is sustained by only blogging

This is important, and it’s something I had to figure out later on. Some folks were independent but had used blogging as a means to a better end, something I’ve talked about when I’ve mentioned the different ways people can make money via their blogs other than trying to sell products.

I consider myself a content creator, but I’m also a consultant. I make the majority of my money by consulting, yet I haven’t figured out how to translate my business blog into a money making machine. The thing is, I’d rather turn this blog into that machine because it’s better placed. I’d also like to figure out how to turn my finance and medical billing blog into money making machines because both are better niched for specificity. These young people have that part figured out, and with way less content than I have. I ain’t pretty but I do have a following in some places; maybe…

7. Other platforms are valued more than blogging

Well, this was a blow to me. More time was spent talking about all the other ways to reach people than blogging. Sometimes the talk was about how to promote one’s blog posts but overall the conversation went towards things like podcasts (which I’m not doing) and live video (which I’m definitely NOT doing) using platforms like Facebook Live and Periscope.

Those are definitely viable ways to reach an audience and lots of people seem to enjoy that these days. Frankly, it’s another thing that makes me feel old because for the life of me I can’t figure out why so many people are interested in absorbing a few seconds here and there of someone’s life (Snapchat) or need a daily dose of wisdom that may only last for a day (Periscope). What was interesting is that a few people did acknowledge the longevity benefit of YouTube; whew! lol

I think that’s enough of that for now. All in all I had a good time, learned a lot even if it wasn’t what I was expecting, met a lot of nice, intelligent people and might even think about going to another conference some day. In the meantime I’d like to highlight a few more people who I saw at the conference that I haven’t already mentioned; not all of these folks are bloggers:

And now, the video I talked about:

6 thoughts on “Takeaways From The Blogging While Brown Conference”