I love social media. I love how there’s just so much going on and so much information being shared by so many people. I love sharing information myself, which is why Twitter is my favorite place to be, because you never know what someone will share there and there’s lots being shared. 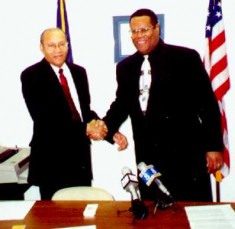 I first touched upon this question back in May 2008 when I asked the general question How Far Are You Willing To Go For Promotion. That was based on something a local guy did (he’s now retired) where he wore certain types of clothing and a gold badge everywhere he went to always be promoting himself, and I wondered if anyone else would ever have the guts to do that. Seems the answer was no.

Over the years I’ve asked a lot of questions about marketing. I once asked if we could stomach sales. I once asked if we hate marketing so much because of what we’ve seen others do. I’ve talked about reasons why we don’t trust salespeople, and thus don’t want to become them. I once even announced that I was about to step up marketing efforts; that didn’t last, if it ever came to fruition or not.

What turns out to be interesting is just how little most of us end up marketing ourselves. A funny story from last week is that I was talking to my buddy Beverly Mahone about writing something for her that would help promote both of us. I put it together and sent it to her, exactly what she asked for. The next day she called and said I didn’t write a bio; I said she hadn’t asked for one. She also said I didn’t add a title page and I said once again she hadn’t asked for one. In essence, what she was saying to me is how could she promote both of us if I hadn’t given her anything to promote myself. Now that’s a shame.

I tend to believe that many of us miss opportunities to promote ourselves, our blogs and webpages, and our blogs. If you ask me, I think a lot of people end up doing it wrong on social media when they go through social bookmarking sites like Visibli before trying to push their content themselves first.

None of us likes “pushy”; I think that’s fair to say. We don’t want to get hammered daily, sometimes even once a week, with a sales message to buy something. I was reading yesterday where Sharon Hurley Hall wrote that she was unsubscribing from a number of newsletters that no longer suited her purpose. Probably a lot of those newsletters were marketing something on too consistent of a basis; that’s why I’ve unsubscribed from so many.

But there are some truths. One, we all need more outlets to advertise or market ourselves and our wares, and we have to be willing to do it. If you can’t advertise in your own space every once in awhile, if not have something ready on a 24/7 basis, well, how fair is that?

I have some products on 4 of my blogs that anyone can buy if they so choose at any time; is it wrong for me to want to have the ability to make money here and there? To the right, by the picture of me and the bird, I have links to some of my other pages where I’m selling stuff; will people hate me for having the audacity to try to make money that way?

Let’s talk about blog posts, or articles. How many times to you promote your own articles and posts on Twitter, where there are literally millions of people saying stuff every day, we have at least hundreds if not thousands following us, and yet we all know that the same people on at 10AM are probably not always the same people on at 8PM, or even 2PM. Who says you can’t pop your own links out more than once?

If you have a Facebook page, are you taking advantage of it by sharing your content, or every once in awhile sharing a product of yours? What about your Google+ page? None of these things are aggressive enough for anyone to gripe. Now, if you’re doing it once an hour or more, yeah, that will get irritating pretty quickly. But here and there… do you really care if a few people begrudge your opportunity to make a living?

Quick story. I was telling Beverly that I knew a local TV news personality but felt strange talking to him about things I do because I felt it might be manipulative in some fashion. She said I should contact him because people in the news are always looking for experts in different fields. I figured I had nothing to lose so I sent him a private message on Twitter, telling him I do things with blogging and social media and could possibly offer an older point of view on these things. He wrote back thanking me for telling him because he hadn’t realized that I did this type of thing. Will it end up with me on TV? Who knows, but at least I’m now known by someone in a prominent position for this sort of thing.

Most of us have to be ready to talk about ourselves, share our links, sell our products, let people know we and those things exist. I’m just as bad so this is a joint project. Sometimes we can do it while we’re supporting others; do you think I didn’t feel I was getting some benefit when I was helping John Garrett market his book How To Deal With Stupid Clowns? What about when I helped Beverly market her book Don’t Ask, or my artist friend Isaac Bidwell market himself and some of his art? Anyone see how that kind of thing helps me and them at the same time?

We can get this done. We can double our efforts, which pretty much means if you’re not doing it already anything you do will be a major step forward. Even if you’re not trying to sell something, if you’d like more visitors to your blog, go ahead and put your link out there somewhere, in a space you have more control over, and get yourself known.

37 thoughts on “Our Reluctance To Market Ourselves”