Back on July 25th I mentioned that I had downloaded the Myfitnesspal app to my phone in an attempt to start addressing some of my health issues. I figured it was time to talk about it since as of last Wednesday I’d been using it for 4 weeks.

For those who aren’t in the know, Myfitnesspal is an app that one can use to help keep track of what you’re eating. In a video I did many months ago I talked about a different app called, appropriately enough, Food Diary, and it was a nice little piece of software that, in the long run, was more complicated in some ways and offered less than this app does.

If you want more detail on why I decided to use this app, check out this video:

Suffice it to say for everyone else, I had a health scare over one weekend while out of town and that told me it was time to get a bit more serious about my health and diet. My doctor had recommended I download this sucker and, me being me, I wasn’t going to do it. But I did, and now I’m glad I did.

Basically, this sucker makes you aware of what you’re eating, as well as tracks calories you’re putting away and other nutritional items. The other app just tracked food but this bad boy tracks the nutritional values, offers a way to scan food that have barcodes and tells you what’s in stuff, does all the calculations on a daily basis and, if you put in a goal, gives you a guide as to how much you’re putting away with everything you eat so that you know when to cut back and are more cognizant about what you’re eating.

In my case it was a real eye opener from the beginning. I started to learn that foods I thought were healthy weren’t close to being healthy. I can’t believe how many times I’ve eaten twice the amount of sodium in a day that’s recommended. I was stunned to see how much fat there is in a regular piece of bacon. And desserts… sniff!

Here’s the thing though. Not counting the first couple of days of working with the app, I’ve only gone over my daily allotted number of calories 4 times. Even by messing up sodium, potassium a few times, fat and sugar once or twice, this bad boy tracks calories and I’ve been able to modify my eating habits so that I stay under the calories. Also, you can earn calories back by exercising which, for me, involves walking, something I’d do more often if my back wasn’t hurting but something I’ve been doing more of, in small chunks, when the weather cooperates; I even walked on the treadmill one night. 🙂 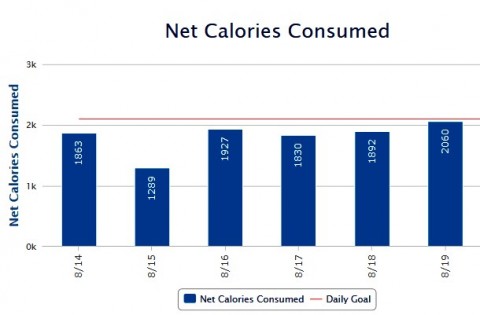 Let’s get back to those calories for a minute. One of the things you should do with the app is set a goal, either a weight loss goal (this is for most of us) or a weight gain goal. You tell it where you are and where you want to go, and how fast you want to get there. I initially told the thing I wanted to lose a pound and a half a week, and realized there was no way I could eat that little amount of food and come close to sticking with it. Instead, I went with a pound a week, told it what I weighed now and the weight I wanted to get to and off I went.

Let’s talk progress, because I have some. At this point I’ve lost 2 1/2 pounds; that’s not bad. Some might not think it’s great but weight loss is always a good thing. However, the two biggest changes have been how I’ve decided to eat and my glucose levels. Let’s take these separately.

For the most part I really haven’t given up anything I’ve wanted, but I have given up some stuff I thought I wanted. For instance, maybe 2 times a week I’ll stop and get an Egg McMuffin at McD’s; instead, I’ll eat 2 pieces of toast or an English muffin, with the comparisons being the McMuffin comes in at 450 calories whereas, depending on type, the muffin or toast comes in around 200 calories. I’ve learned that for the most part I can eat less in the morning so that I can have a better dinner and still have dessert; that suits me just fine.

For lunch, shocking as it may be, turns out a Whopper has less calories than a grilled chicken Caesar salad at Wendy’s; that was a shocker. However, for the same amount of calories I can get a McD’s fish sandwich and a small fries. One offers more food if I start feeling the hunger because I didn’t eat enough breakfast; see how this works? 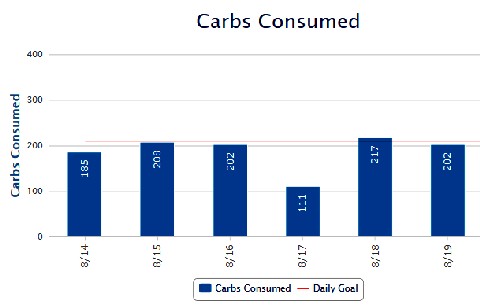 Dinner has been interesting. I eat some meals in the hotel room but most of the time I go out. If I go to a chain restaurant or a restaurant that’s popular in a certain area it’s easy to track (oh yeah, they have a massive database of foods and information; all you have to do is search for them during a particular meal).

If you go elsewhere you have to go into the search function and find something close to it. For instance, I go to this particular Japanese restaurant and I had to search separately for grilled chicken and grilled shrimp to add to the rice I get, and it turns out that steamed rice is very low in calories; I don’t do it all the time but most of the time I’m good with it.

If I’m measuring things well, I always have room for dessert. However, I’ve had shocks both good and bad. The good is that the calorie count in something like a Reese’s peanut butter cup or a Snickers isn’t all that bad at night. The bad is that serving sizes can be underwhelming. There’s this particular cake I like in the town I’m working in that turns out to have 530 calories per serving, and when I did the calculations it came out that the piece of cake I got was considered to be 3 servings; ouch! So, I had to cut it into 3 pieces to stay under. However, I learned that I could handle that dessert in small doses pretty well; always good to find out good things about yourself.

Now, the glucose levels. I’ve mentioned it here often that I’m diabetic. Well, my glucose levels were really out of hand I have to admit. My last eye appointment the doctor said it was starting to show up in my eyes; that’s never a good thing. My last doctor appointment, my overall numbers were down but not my much, and there was no other medications to take, and I was almost at the highest level of insulin one could take before moving into the next stage. In four weeks my glucose level has dropped from a monthly average of 230 (that’s extremely bad) to a level calculated on Wednesday of 129; that’s normal! I haven’t averaged normal since the first year I was diagnosed with diabetes; wow!

Am I happy with what this bad boy had done for me? Absolutely! If I hadn’t lost any weight I’d still be pretty happy. But there’s more.

First, you can add the app to all of your electronics, including your desktop or laptop computers, and all the information syncs whenever you update anything. As I mentioned earlier, if you have a problem with something like sodium you can track that, but you can also alter the numbers to suit you. I have a problem with potassium and unfortunately that one doesn’t always work because the government doesn’t make anyone tell you that, so many times they don’t tell you.

Second, if you’re of the mindset to do it there’s an entire community you can join to talk to people about the app, weight loss, health stuff and more. You can also hook up with someone to let them see what you’re eating and, if you create your own meals with the nutritional information they, and others can tap into it. I haven’t gotten up the nerve to do that yet; I want to drop way more weight first. lol

I’m not sure I can do a lot more justice to talking about this thing except to say that if you’re having any problems whatsoever that are related to eating habits, I’d recommend trying this bad boy in a heartbeat. I’ve even got my wife saying she’s going to start using it once she’s home from her conference; never good to start an eating plan when you’re leaving town for such a thing. 😉

That’s all I have. Any questions or comments… I’m ready to entertain them all.