On Friday the 21st I decided that for the first time ever I was going to try the hot tub at the health club my wife and I just joined. I get all my stuff together at the house, mainly because this means I’m going to have to change at the club after I do my workout, and then change again after I’ve gotten out of the hot tub. Normally I just wear what I’m going to workout in and then come back home. 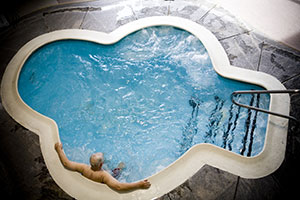 We go to the club, my wife and I, and we do our workout route. Then I decide I’m going to try the hot tub while she works out some more. I go into the locker room to change, and… before I go any further I just have to say there is no other ways for me to describe some of what I’m going to say so you just going to have to go with me here.

I’m in the locker room, and I’m changing into my hot tub stuff. I decided that I am not sharing all of this body with all of these people I don’t know in public until I get into better shape, so I decide I’m wearing a shirt into the hot tub; stop laughing. Also, I haven’t been in real swimming trunks since 1976, since I can’t swim, and I wasn’t feeling all that comfortable with “the boys” hanging out without being in underwear, so I wore underwear under my swimwear.

The rules say you have to shower before you get into the hot tub, so I had my first shower ever with a shirt and underwear on. Across from me is this older white guy, with his back towards me. I finally had a question answered that I’ve wondered about for many many years that I really wish I hadn’t had answered.

That question has always been about white men’s sunken behinds. My wife and I see them walking down the street or in the stores or many other places, in pants with a belt and no behind, and we often wondered where the heck the behind is and how they keep their pants on. Well, I’m facing this older guys sunken behind, him totally naked, and my eyes aren’t appreciating it one bit. It reminded me of the only bit of the show Sex In The City that I saw where this woman had sex with an older man and thought maybe her beliefs in dating older men were wrong until she saw him walking away from her. Oy!

Then he decides to turn around, and now I’m facing the front of him. My eyes immediately went up to his head so I didn’t have to see his private parts, which probably would have freaked me out even more. This is a guy who you know has been working out at the club because at least he’s got a chest. The bottom of this chest immediately shrunk into this space that’s supposed to have a stomach, only I couldn’t notice one. I was totally freaked! I finished my shower as quickly as I could and got out of there.

Now it’s hot tub time. I set my towel and my glasses and the key to the locker I was using down on a chair and proceed to the hot tub, which is set at 103 degrees. I had to get used to that, which involved four steps to the bottom of the hot tub, me pausing at every step, finding out that the fourth step, which is to the bottom of the thing, was the longest drop down. Once totally in, the water is around the top of my stomach; this was about a 90 second process. I walked myself all the way to the back, as there was this guy standing in the middle of the thing to one side, and I had planned on settling down there.

However, within a couple of minutes my eyes were burning, and we speculated later that it was the chlorine coming from the pool in the same room, or possibly the hot tub, which was causing me all this distress. This meant I had to get back out of the hot tub, grab my towel and the rest of the stuff, put it near the area where it was originally sitting, and get back into the hot tub.

Mission accomplished, and now I’m sitting in the hot tub and relaxing. Or so I was hoping, because let me tell you, that hot tub was kicking my behind. My knees were loving it, but the rest of me wasn’t quite sure. The jets were very powerful, and I wasn’t prepared for anything like that. I did stay in about 10 minutes however, just to be a man about it, but when I got out I felt just like I had done another full workout. I was whipped, but me being me, you know the adventure wasn’t over.

Time to go back into locker room. Over where the lockers are the floor’s all rug, and I now know that I’m going to have to take some of the stuff off and wring out in the wet area before I go back to the lockers. As I look into the locker area, the original guy I saw is still there, and now there’s another white guy there, and I’m seeing the back of him and he’s also got a sunken white behind. I’m freaked again!

I take my shirt off first and I wring it out in the shower area and set it down. Then I take off my swimming trunks and I wring them out and set them down. Now, I haven’t been in a locker room or shower naked around any other guys since probably 1991 or 1992, which was the last time I belonged to a health club, and I’m not feeling it this time around. So I dried myself off as much as possible and went to my locker.

I was all alone by the locker with no one else around and I reached into the locker and grabbed some dry underwear, whisked off what I had really quickly and dried myself just as quickly, and pulled on new underwear. Mission accomplished; whew! Then I got dressed and put back together, all the while feeling extremely drained and tired.

When I finally got back out to the lobby, where my wife was waiting for me, I felt like I could barely move. I ordered us a couple of smoothies, which helped put some life back into my body. Probably one of the issues is that I hadn’t had anything to drink while working out or while I was in the hot tub, and I was probably dehydrated.

At some point I know I’m going to go back into the hot tub again, but I certainly hope I don’t see what I saw before, and I also hope I’m smart enough to at least take some water in with me to see if that helps out some. Why can’t a hot tub be more like a Jacuzzi?

38 thoughts on “My Hot Tub Adventure”