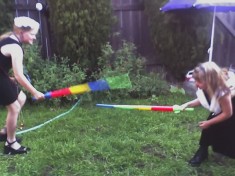 18 thoughts on “An Epic Battle; There Will Be Songs…”