If you do anything often in your life, at some point you will start to experience some very strange things, even if they’re mildly strange. In my case, mildly doesn’t quite fit.

As some of you know, I’m traveling a lot these days because of my consulting business, and that means I’m flying. This week, I had some adventures that concerned being in airports that I thought I would share with you in a story form. I do that because one, I think stories are more interesting, and two, because it’s going to be long, and three, because it’s true. And it includes a video; what more could you ask for? 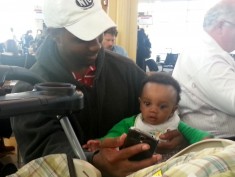 The story begins at the airport in my home area of Syracuse New York. I had my boarding pass with me, and I had qualified for what’s called a TSA pre-check, which means I got to go through a special short line, got to keep my shoes and belts on, and if I didn’t have any metal in my jacket I would have had to take that off either. However, since I did have some metal items in my pockets. I decided it was smart to go ahead and put my jacket on top in one of those bins.

I walked through just fine, get my stuff and head towards my gate. I’m pretty early, and there’s a new restaurant over by my gate so I decide to stop in and get something to eat. I recognize the woman working there as a lady who used to work at a restaurant across the street from where I live that closed and became a Moe’s Southwest Grill. It turns out that, because the restaurant had just recently opened, they had very few items that were on their menu. Last, I had to order something that I really didn’t want, but I was a little bit hungry so I decided to give it a shot.

At some point I decided to check my boarding pass just to make sure I had the time I was supposed to get on the plane accurate in my mind. At that point I realized I didn’t have my boarding pass anymore, and that I must have left it at the front when I went through the check.

I told the waitress I would be right back, and I walked back over there to see if anyone had turned in a boarding pass. I asked one of the police officers for some assistance, she asked one of the TSA people about it, and the woman says that all I have to do is go to one of the airlines stations and they would print a new boarding pass for me.

I go back to the restaurant, pay the bill, get my stuff and go to get my boarding pass. While I’m pulling out my ID, which is my drivers license, the lady tells me I don’t need it because my name is already on file. However, it’s a good thing I did check because it turns out I didn’t have my drivers license either. Then I remembered that as soon as I got through check out I had put my license and boarding pass in the bin and then I put my coat on top of it and totally forgot about those items.

The lady let me leave my bags behind the counter, and I rushed back to the checkout line to see if anyone had turned in my license. Of course no one had, so for the next 15 minutes everyone started looking for my drivers license, which I wasn’t allowed to do because I had are gone by that area.

Lucky for me, because not that many people qualify for the pre-check one of the police officers found my license and my other boarding pass. Talk about a lucky break, because I’m not sure I would’ve gone on the plane without my drivers license. It certainly would have been a miserable two weeks out of town without it since they would not let me rent a car.

All goes well from that point as I get on the first plane which will fly me from Syracuse to Washington DC, Reagan Airport. When I get to turn my phone on after the plane lands, I noticed that I had both a phone call and an e-mail. Check the e-mail first to discover that my plane has been delayed an hour for the next trip because of maintenance. That doesn’t seem like such a big deal, so I chill with a candy bar and wait that extra bit of time before I had my gate. Then there’s another hour of waiting, as against maintenance must have needed more time to get things fixed.

At this point the video’s going to take over for a short bit, and I hope you watch it because it tells what happens between what’s above and what’s coming after the video. Suspense! Lol

I hope you watched the video because now we resume the rest of the story. For most people what’s above would have been the end of it all but you know by now that normal things aren’t part of my life.

I had met someone who’d been on my flight that was canceled named Susie. It was great because we kept each other alert all night and that made the entire thing more palatable to deal with. And she turned out to be a prominent person for part of the rest of this story.

We moved back to the gate area about 7:30 in the morning, because they won’t let you stay in the gate area if there are no planes expected to be leaving during a period of time. We sat in an area where there were more seats for a bit of comfort and quiet, an area I like because I like to people watch and normally talk about people in my mind because, well, some folks dress in mysterious ways when they travel. It was nice having someone to talk to about these folks, which might seem mean but we were talking low and we were punchy. By that time she’s been in the airport for more than 16 hours and I hadn’t slept in about 22 hours.

Suddenly there’s this screaming coming from behind us somewhere. We look back and I don’t see anything but Susie does. Then we see this older man walking away and some young woman, who we determined had to be his adult daughter, but disturbed in some way, running after him and hitting him… and not lightly. She was screaming something but we had no idea what it was.

I turned away for a minute and Susie says “She just hit that guy in the red shirt in the back of the head.” Sure enough, I look over and this guy who’d been sitting in a Gordon Biersch restaurant on a stool in a red shirt is looking over his shoulder at this woman, but she wasn’t paying him any attention.

The woman is still screaming and her father has stopped and is trying to hold her, but he’s fighting a losing battle. Now we hear all sorts of people calling for the police and blowing whistles and I’m thinking someone needs to be taken down.

Someone is, and in the annals of lessons one shouldn’t need to be taught, she turns around and slugs this guy in the red shirt in the back of the head again because the fool (I’m sure you’ll agree) had turned back around and had started eating his breakfast again. This time it was hard enough to knock him off the stool and onto the ground because the lesson he didn’t learn that almost everyone else would have learned the first time is you never turn your back on a crazy person who’s screaming and has already hit you. As he learned, hopefully for good, you could find yourself on the floor.

What came next was strange, as if we hadn’t had enough strange so far. The father pulls out a chair and is able to get this woman to sit down. She sits down, begins staring out somewhere, and starts saying over and over, very loudly, “Mom. Mom. Mom. Mom. Mom…” Not screaming, not chanting, just saying it loud enough for everyone in the area to hear, kind of monotone, and it’s the only thing I understood her saying all morning.

Having enough weirdness for one day, Susie and I decide to go over to the gate where we’d be catching the plane, which meant we kind of had to walk by this woman, who was still sitting in the chair and was now rocking. The police were talking to the guy in the red shirt, who could only say he was popped in the head twice because he never saw anything, and a couple other cops were standing behind her.

As we’re walking by this woman, she lets out this blood curdling scream and crying as if she’s in great distress, then immediately follows it with one of those laughs you often associate with evil geniuses in bad horror movies. Based on everything else that happened, I’m not sure saying it was the strangest thing is appropriate here.

About 25 minutes later, as we’re sitting in the area of our gate, we see the family walking by, the father luckily no worse for the wear, the mother making her first appearance, and this young lady, all of them pulling bags behind them, but she’s muttering something to herself, loud enough to be heard but not loud enough to understand it, followed by two police folks and another one on a Segway.

After all that normalcy came back, I got on my plane on time, got to my destination on time, drove to the hotel, cleaned up and went to work. In the video I said I was thinking about not going, but not only would I not get paid but I’d have had to pay for two nights of my hotel bill and that didn’t seem fiscally intelligent. And now, back to the dull and boring parts of my life once more… yeah, right!

You just can’t make this stuff up. 🙂